The devices go on pre-order tomorrow. 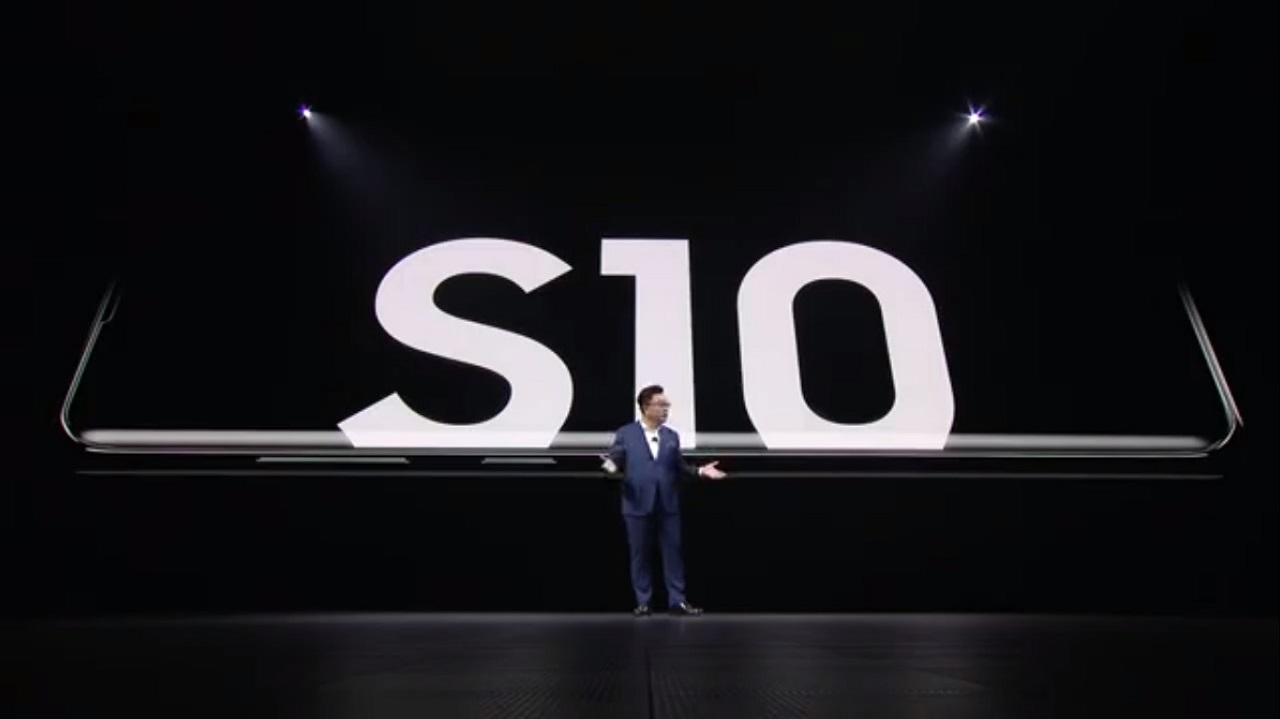 Samsung held its Unpacked event today in San Francisco, California to announce the Galaxy S10. The tenth edition of Samsung’s flagship will come in three variants dubbed the S10e, S10 and S10+. Aside from the trademark high specs and price that the Galaxy lineup is associated with, the smartphones pack quite a punch so let’s get down to the details.

The Galaxy S10+ is the top tier smartphone and comes with a 6.44” Super-AMOLED Infinity-O display with a Quad HD+ resolution (1440 x 3040 resolution, 526 ppi). The display is HDR10+ complaint and built with Corning Gorilla Glass 6 protection and is termed so for the selfie-camera cutout. Samsung claims its the most color-accurate display on the market. At the chipset level, Samsung continues its distribution strategy of offering international markets the Exynos 9820, with the domestic US market getting Qualcomm’s Snapdragon 855. Both chipsets come with a tri-cluster design, with two power-packed cores, two performance cores and four low-range cores. The S10+ comes with 8 GB of RAM and 128 / 512 GB of storage, with a special variant packing a whopping 12 GB of RAM and 1 TB of storage. And a microSD card slot is included as well.

The camera configuration sees a minor update, with the rear now shipping with a triple camera setup comprising of a 12 MP f/1.5 – f/2.4 variable aperture wide-angle camera, a 12 MP f/2.4 telephoto lens and a 16 MP f/2.2 ultrawide camera with a 123-degree field of view that should enable some ultra-wide panoramas. The cameras come with a neural processing unit that make use of machine learning to aid photography. The phone can record videos up to 4K at 60 fps, 1080p at 240 fps and 720p at 960 fps, sort of rivaling the Xperia XZ3. The S10+ goes a step further however, becoming the first smartphone to support HDR 10+ video recording. Samsung has partnered with Adobe to feature Premiere Rush on the S10 for video editing.

On the software side, the S10+ will be the first smartphone to support Unity’s Adaptive Gaming Performance. The phone comes with Fast Charging 2.0 and features all WiFi connectivity options (802.11 a / b / g / n / ac) including the recently announced WiFi 6 standard (802.11 ax). The phone is IP68 water and dust resistant, comes with a 4100 mAh battery as well as 15W fast-charging.

Stepping down from the models, it’s easier to highlight the differences. To that end, the Galaxy S10 is largely the same as the S10+ with very few key changes. First, the screen is now a 6.1” display instead of the 6.4”. Second, the battery capacity has been dropped to 3400 mAh down from 4100 mAh of the S10+. And third, the phone comes with 128 / 512 GB storage options with 8 GB of RAM with the special 12 GB / 1 TB variant not present. That’s pretty much it; everything else is practically identical to the Galaxy S10+.

The third model is where things differ quite a bit. Dubbed the Galaxy S10e (colloquially referred to as the Galaxy S10 lite), it features a 5.8” Full HD Display (1080 x 2280 resolution, 438 ppi) with Corning Gorilla Glass 5. The battery is a significant step down to 3100 mAh. And the phone itself comes with a 6 GB RAM variant coupled with 128 GB of storage, with the option to go for an 8 GB RAM version with double the storage.

All phones feature a fingerprint reader. Where the S10e has a side-mounted one, the S10 and S10+ come with an under-display ultrasonic fingerprint reader for better accuracy. The smartphones also come with Bixby and the S10 and S10+ also come equipped with the Samsung DeX experience to use your phone as a desktop. The coolest feature perhaps is the reverse wireless charging, allowing Samsung phones (S10, S10+) to charge other phones and even devices (that the Apple Airpod should have done), with Samsung finally taking a cue from Huawei’s Mate 20 series. Apart from Black, White and Green as the colors for all three, the S10+ will ship with Blue.

And now for the pricing. The Galaxy S10e will start at $749 for its most basic version. The Galaxy S10 takes that up to $899 while the Galaxy S10+ goes even higher at $999. And the priciest 12 GB RAM / 1 TB storage version costs an astounding $1499. The phones will be available on March 8 but the embargo on YouTube reviews and videos should be lifted soon enough.

Taking a cue from Apple’s Airpods, Samsung is also introducing the Galaxy Buds with Bixby built in. Bixby itself has been rather stale but will now support three languages – German, Italian and Spanish, with a knack for differentiating British English. The buds support Wireless charging, allowing you to charge them at the back of your S10 using Wireless Powershare. They should be available on March 8 as well.

In Samsung’s own “one more thing moment”, the electronics firm then proceeded to unveil a surprise phone (not so surprising by this point). The Samsung Galaxy S10X is the company’s and the world’s first 5G smartphone that can’t run on 5G right now since there’s no network setup. It’s a top of the line phone on the lines of the S10+, with an even greater 6.7” Dynamic AMOLED screen and a 4500 mAh battery, both the biggest on a Galaxy device. It supports fast charging and comes with a 25W charger. Its camera setup includes a 3D Depth Sensing camera, allowing the addition of blur in videos in real time which, could really be game-changing for shooting cinematic content right from your phone. Samsung invited Verizon CEO Hans Vestberg on stage to talk about the upcoming 5G wave and get people excited. He revealed that Verizon’s 150 million subscribers will be the first to get their hands on a 5G phone, thanks to their partnership with Samsung.

The Samsung Galaxy S10 models have probably been among the worst kepts secrets of the smartphone industry. With leaks showing up every other day left and right (pretty sure many were planted by Samsung themselves), little was left to the imagination. Almost all of these specs were pre-confirmed in the days / weeks / months leading up to the smartphone’s unveiling. Of course this isn’t all that Samsung unveiled as it also showed off the foldable phone, which you can read about here.

The Road To Avengers: Endgame – Thor