Agents of SHIELD brings the focus back to the main storyline as we bid farewell to a beloved character. 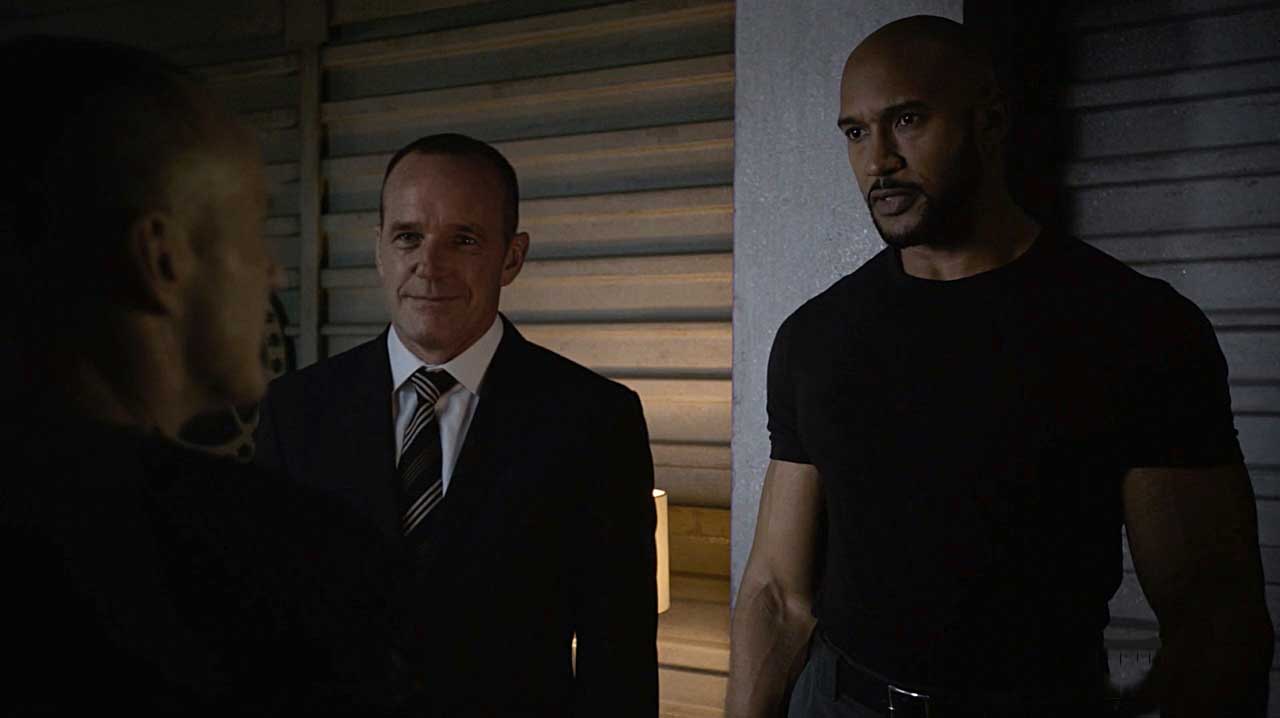 After the mind-bending departure that was last episode, Agents of SHIELD resumes its main storyline as we’re back to following and progressing its two long-running narrative threads. As May brings the Coulson lookalike and his gang to S.H.I.E.L.D. headquarters, a tense back and forth begins between Sarge’s gang and Mack’s team. Meanwhile in space Fitz and Simmons try and figure out their way back to earth only winding up from one complicated situation to the next.

I have to admit, after all they’ve been through, the Fitz-Simmons subplot did feel like a bit of narrative stalling. Getting back to Kitson allows the show to reuse the casino set it built for Episode 3 as well as showcase Kitson’s wide, industrial scale in a long VFX shot but it doesn’t add anything substantial to the proceedings. We do get to finally meet Mr. Kitson himself, whose forefathers founded and established the planet’s gambling and brothel culture as well as Karolina Wydra’s Izel who bails our leads out of their sticky situation and inadvertently becomes their ticket back to earth. Anthony Michael Hall plays Kitson like we’d expect him to, a slightly crazed megalomaniac though he’s a lot more sane than others in his position would be.

A complete reunion of the cast will have to wait though as Mack and co are busy fielding Coulson-Sarge’s mind games. Sarge is fully aware now of his resemblance to Coulson and tries to use that to his advantage, getting into everyone’s skin, especially Mack who really looked up to Coulson and has been trying to step into his shoes ever since. And Jaco breathing fire was sick and totally unprecedented, leaving me curious to learn what the hell was that all about. It’s fun seeing their interludes even though it begins to get tedious after a while, which is where the third act comes to the rescue.

May and YoYo reverse-engineer Sarge’s tracker with Deke’s assistence (who’s been totally crushing on Daisy / Quake ever since) and manage to nab two Shrike. The mistake they make is putting them in close proximity to each other which triggers a situation that only Sarge knows the way out of, something he uses to his advantage. Those final moments were really tense and even though we know nothing bad is going to happen to either May or Coulson, Keith Potter skillfully directed the sequences and maintained the intensity, cutting back and forth between the ground and air teams to up the tension and eventually bring the conflict to a close. It was one of the episode’s redeeming factors in what was otherwise a mostly filler hour.

That artful cutting between the two sequences is something that was visible throughout the episode. While editors make it a point to transition between two entirely different plot threads through some connecting cuts, Toldja did so with absolute flourish. Nearly every cut to Fitz-Simmons and back was preceded by some clever exchange that foreshadowed a transition, whether it was Coulson’s side-face coinciding with a Kitson painting or Mack putting Daisy’s headache at ease after Simmons is hung upside down, the smooth flow between scenes meant that time just went by in a snap.

One of the other interesting things happening in the episode was getting to know Sarge’s team a bit. I particularly enjoyed the bits with Jaco; as obvious exposition as it was, it helped to put him into some perspective. Sarge’s team are not just mindless red-shirts or Shrike hunters, but come with their own baggage and stories which have motivated them to arrive at this point. I’d love to see a three-dimensional side to Brooke Williams’ Snowflake, who has come across as painfully one-note thus far, as well as learning more about Sarge. Agents of SHIELD is doing a nice dillying-dallying over whether Sarge is really the bad guy or whether he’s just someone doing his Shrike hunting thing that unfortunately puts him at crossroads with the team, but for some reason the show hasn’t fully embraced that side yet.

Toldja did conclude on a heartbreaking note as we bid goodbyes to a synthetic character. While I’m unsure if this is the last we’re seeing of Enoch, their separation sequence was well handled and just the right bits of emotional without overdoing it. I fully expect Enoch to make at least one appearance before Agents of S.H.I.E.L.D. airs its final season; given the show’s penchant for bringing back old favorites and the necessary setup in place for our terrans to reach out to this Chronicom, I see no reason why he shouldn’t return at least one last time. Enoch’s adventures in space and his mission to save his race could very well make for an Agents of S.H.I.E.L.D. spin-off show, if the audience is into that sort of things.

For the most part, Toldja was a standard episode of Agents of SHIELD that had a few fascinating bits and a riveting third act but failed to add anything significantly new to what we already know about our characters. Considering the two-part upcoming episode that’s lined up, I suspect it will be the place for some truly earth-shattering revelations to take place. In a traditional time, the next episode or two would’ve crossed over with Spider-Man: Far From Home and pushed the Multiverse implications of the timeline further (there was already a mention in today’s episode). But since the show’s been running off the Marvel Cinematic Universe canon timeline, I guess that’s not a priority anymore.