Agents of SHIELD finishes off its two-parter episode with a satisfying resolution and an intriguing cliffhanger. 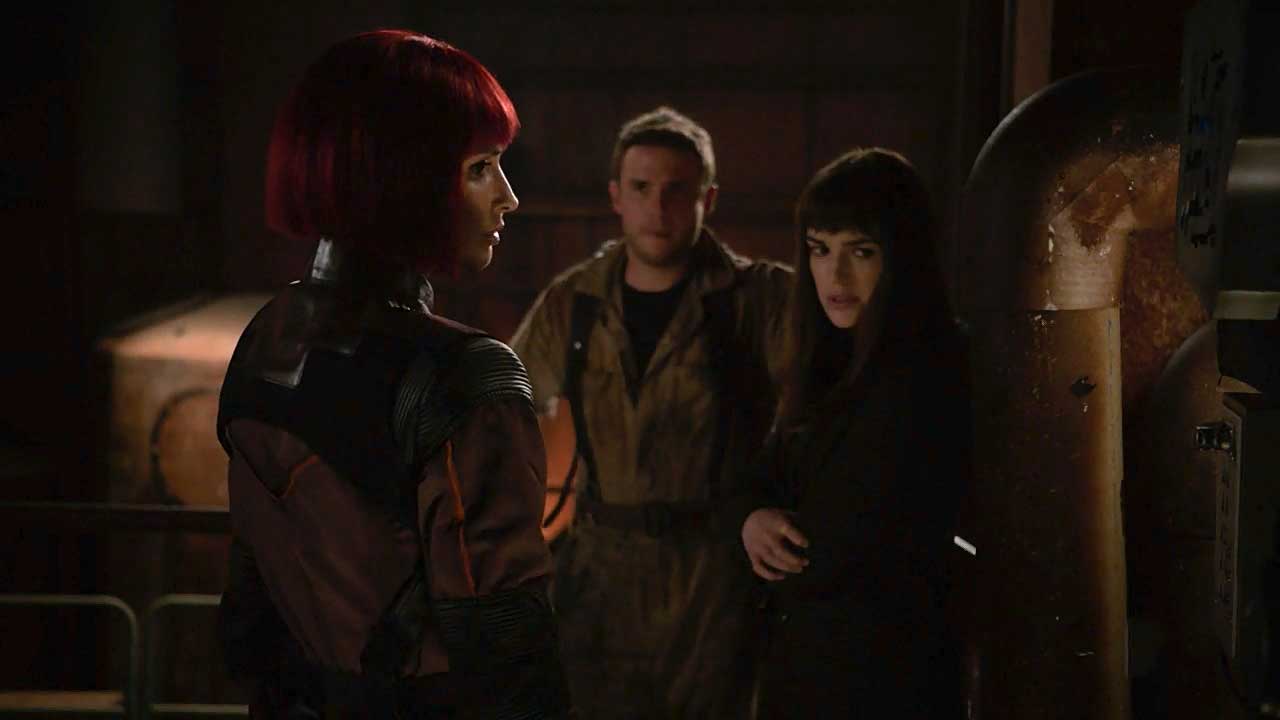 Agents of S.H.I.E.L.D. wrapped up its two parter episode Collision Course in style as it pretended to conclude Izel and the Shrike’s storyline in style, while finally reuniting Fitz and Simmons with the remaining crew after almost a year (literally). And as the crew celebrates their presumed victory, the episode finishes on an intriguing, yet somewhat predictable cliffhanger, that should set fan theories abuzz.

Carrying on from last week’s Part 1, Part 2 had a relentless narrative for pretty much two-thirds of the show. With Daisy, May, Deke and Snowflake headed for the Shrike with an atom-bomb aboard, Sarge’s mission of destroying the Shrike and taking out Izel with her once and for all seems ever so close. Of course it wouldn’t be a show if that actually happened so without giving too much away, the plan is foiled, leading to some more interesting set pieces aboard Izel’s ship and the truck.

Once again, the back and forth between Izel and Sarge is fun to witness because they both paint each other as the real villains when in reality, they both sound like antagonists at this point. It’s almost as if our “heroes” are trapped in a battle between one baddie vs another, and at one point Izel was dangerously close to revealing Sarge’s true identity, calling Coulson as merely the skin that this entity has inhabited. Agents of SHIELD has been able to successfully bring some more obscure comic characters to life in different ways (Hive / Grant Ward) so it makes sense that Sarge could be a known comic enemy in disguise.

The novelty of the cliffhanger, while intriguing, is quickly given away if you have a look at the next episode’s preview. There’s no way May would pull that stark of a move, as much as she says it and ever since they returned from Izel’s ship, something’s been amiss with Davis. Putting two and two together, it follows that Izel has snuck in aboard the ship somehow and further revelations should help shed light on exactly what set of her powers helped her do this, while also revealing Sarge’s backstory and past.

It was pleasantly refreshing to see Jaco come around and redeem himself in the final moments. It’s almost like all of Sarge’s aides were misguided good guys and by the end, it almost feels like all the enmity from the beginning has paved the way for a more mature conversation. Despite his relatively less screentime, Winston James Francis has managed to strike a chord with us viewers, allowing us a glimpse into Jaco’s humanity, something largely a result of his backstory being revealed. And I simply loved the ingenious use of Sarge’s portal device that played so brilliantly in reuniting our separated characters.

Visually too, this was a top-notch episode. It can get difficult when the bulk of the action is restricted to the inside of a trailer truck but director Sarah Boyd used that constraint to great effect, especially in a money-shot for Quake that ends rather abruptly, but is effective while it lasts. The atomic explosion is beautiful to behold but again, the scene could’ve lingered around a bit longer to let its full impact sink in.

Fitz’s reunion provided for some funny moments, most of which came with Deke. I’ll admit I’m not a fan of Deke and Snowflake randomly hooking up and acting all dumb; it’s almost as if Deke has been reduced to a caricature while Snowflake has been delegated to a bimbo. For this episode though, it was fun seeing Deke have a word with his grandparents, one of whom didn’t even recognize him thanks to the time travel. I’ll be waiting to see if Snowflake develops into something interesting; not holding my breath for it but it would be cool if she got a Jaco like transformation instead of the one she’s been handed over.

On the whole, this was a terrific episode of Agents of S.H.I.E.L.D.. The show tends to really hit its stride in the final few episodes and we’re now down to the last three. If next week’s preview is any indication, things are about to get a whole lot more interesting. Aside from a few incredulous beats, such as Sarge beating Mack in a one on one fight (there’s no way a man like Clark Gregg would be able to take down someone with Henry Simmons’ physique) , the episode was packed with all the stuff that makes SHIELD tick, including some touching moments (again, Henry Simmons and Natalia Cordova-Buckley’s emotional climactic moment). Let’s hope the Agents of SHIELD finishes up on a high and sets the stage for an even more gripping Season 7.