Daredevil is metaphorically resurrected after the events of The Defenders

Daredevil is metaphorically resurrected after the events of The Defenders 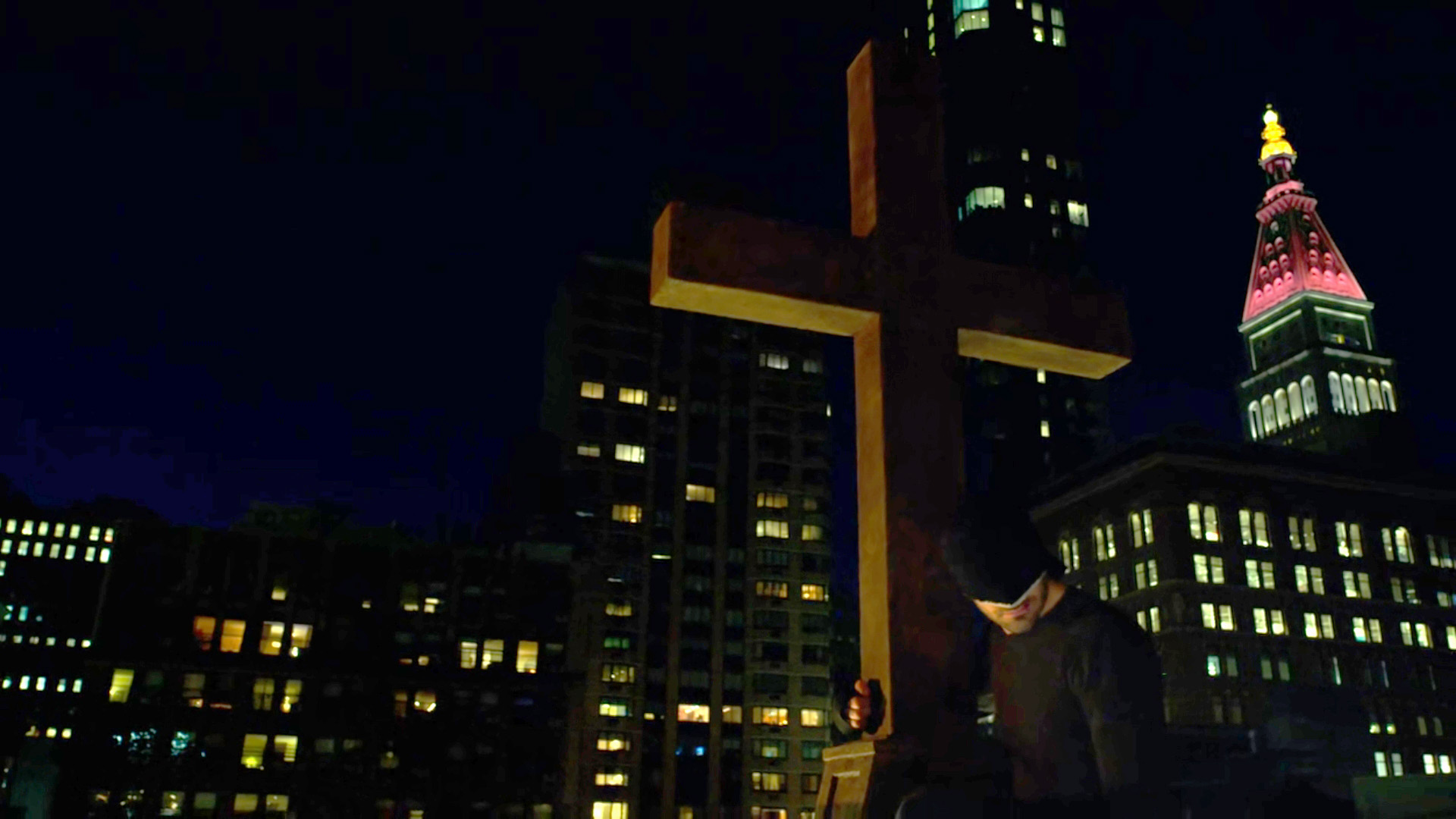 At long last, one of the best and most revered fan-favorite Marvel Netflix shows is back. The Devil of Hell’s Kitchen is in a physical mess right now after the catastrophic Midland Circle skyscraper collapse and he’s no Dwayne Johnson to survive one with barely a scratch. Instead, Matt is discovered soaked in blood, with a pretty gruesome closeup of his face that highlights the severity of his wounds when he’s taken in by an orphanage and nursed by the very nun who raised him in his childhood after his father’s demise. Sister Maggie, so they say, is an important character in the comics with her origins best left unexplained for now lest they hold some significance later.

The highlight of the episode is the back-and-forth between Sister Maggie and Matt Murdock. Murdock is completely broken after repeatedly getting beaten down for his undying efforts to save the city and protect innocent civilians and getting nothing in return but branded as the devil, ­often at significant cost to his personal life including strained relationships with his loved ones. They discuss their plights in the context of the bible and Murdock realizes he’s tired playing the dual life. In a rather cool sequence, he regains some of his senses back by being able to feel vibrations of different surfaces and trains and pushes himself way too hard in a brief montage until a boxing match arranged in the confines of the orphanage’s basement knocks him and his eardrums out with a thud. Yet, we do see him briefly donning the crude look from the Season 1 opening episode as he tries to thwart crime in the hopes that fighting will make his senses return, to no avail.

I absolutely love how instead of flat out ignoring the events of The Defenders, Daredevil hinges on them to explain Matt’s current situation. It’s a direct carryover and you even get to see sequences from that show that form a lot more of a connection on the Marvel TV side of things than the likes of say Iron Fist or Luke Cage which almost sidestep the team up show and launch straight into their own stories. This sort of interconnectedness is what us fans thrive for and I’m hopeful for some other references down the road as long as it doesn’t detract from the show’s story, which in this case, it doesn’t.

Director Marc Jobst uses some partial point-of-view shots to get us to feel Matt’s hearing loss with strong effect. Sounds appear muffled during such moments, simulating Matt battling deafness in one ear. We don’t get Matt’s sense of sight during these scenes as that would be too dark (pun intended). And as Matt recuperates, we briefly touch down on Karen and Foggy who’re still trying to grapple and come to terms with the truth that Matt may be gone after the events of The Defenders. Matt and Karen were at an interesting spot; for those who don’t recall, Season 2 ended with Matt revealing his true identity to Karen although we didn’t get time to catch up on that thread in The Defenders with the sheer density of that mini-series’ story. We get to explore some of that fallout here as the show flashes back to a slightly detailed discussion where Matt explains the nature of his powers to Karen. 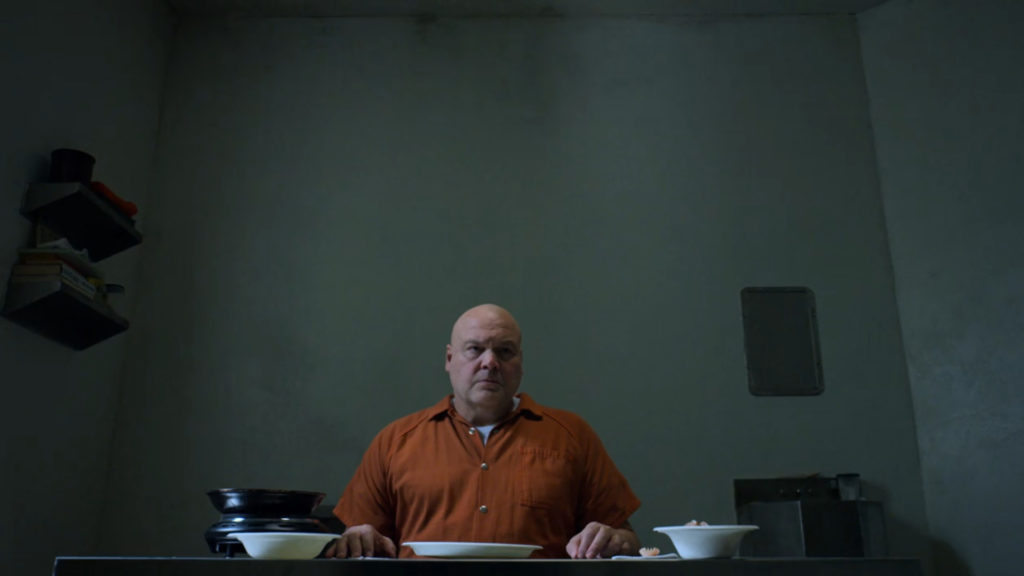 Also back with Matt is his formidable foe Wilson Fisk. Vincent D’Onofrio is cold and menacing as he was back in Season 1, reentering his character’s skin comfortably when he loses his calm over prisoners making incessant noise. He’s still concerned about his lover Vanessa’s safety and agrees to strike a deal with the FBI by the end of the episode, which should see his ouster from prison. Boy I can’t wait for a showdown between Fisk and Matt.

The third pillar of the show is an FBI agent named Ray Nadeem. Having lost a lot of his finances to curing his sister-in-law’s cancer, Nadeem is desperate for a raise and rightfully so, having been denied it for three years. While his subplot is succinctly explained, it’s so bizarrely out of touch of the main show’s proceedings that it almost felt as if Netflix had accidentally jammed a new show in the middle. It’s only when he comes face-to-face with Fisk do you realize it’s all in the same episode. Also, it’s a little pleasantly odd to see an Indian family amid a major Marvel Netflix show; these shows generally always try and tackle different cultures whether it’s the Jamaicans in Luke Cage or some Asians in Iron Fist and here’s hoping this will be a chance to explore the life of Indians living as NRIs in a hostile neighborhood of New York.

Unlike most other Marvel or Netflix shows (save for probably The Punisher), Daredevil starts strong and grips you right from the beginning. It’s a slow burn alright but one that’s only slow if you count the number of significant developments that took place. In terms of pacing, it’s right at home with some of Netflix’s finest and I only hope it gets better from here. With Marvel Netflix though, it can take at least 5-6 episodes for the show to fully gain its form and launch into an assortment of high-octane stuff.

Check out our review of Daredevil Season 3 Episode 2 here.

The Flash Production Delayed To Late 2019

That Leaked Avengers 4 Trailer Is Fake