Game of Thrones delivers another battle-heavy episode, albeit one with much more horrifying outcomes and major deaths. 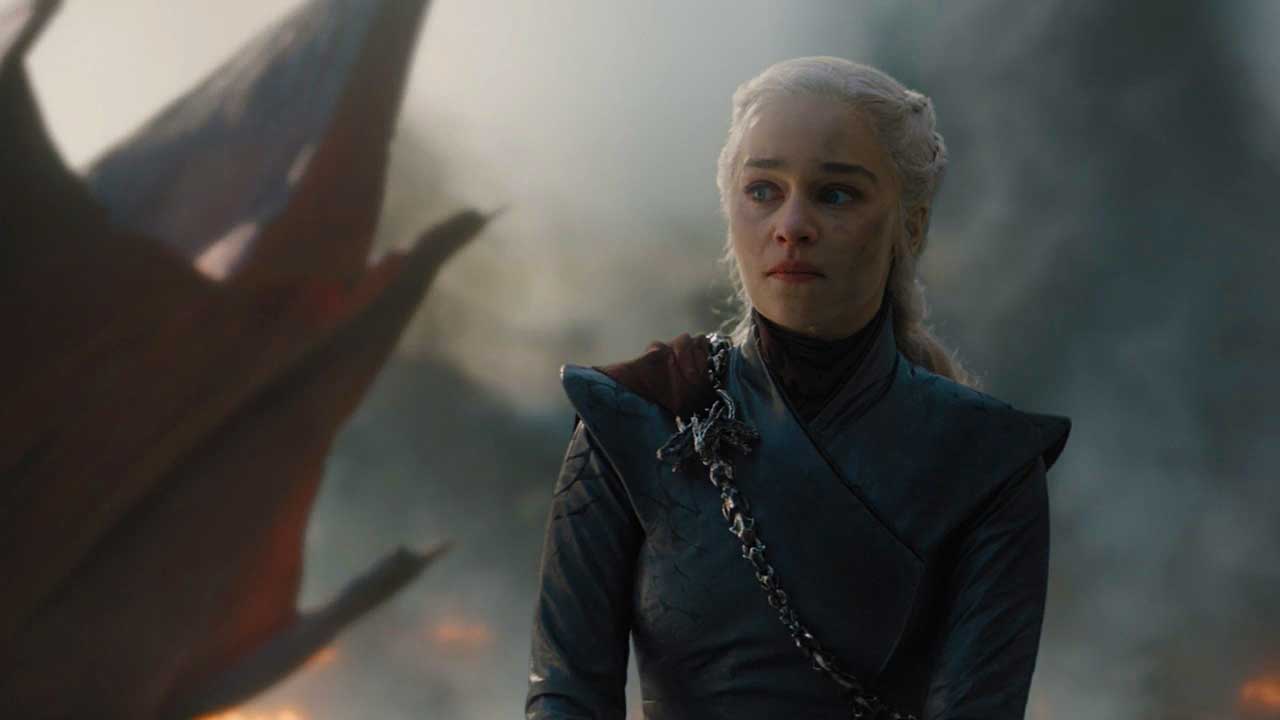 It was all inevitably building up to this. Warning: Major Spoilers Ahead.

Even as many saw Daenerys as a liberator, the most just of the Targaryens, and the one queen truly worthy of the Iron Throne, tension was still rife and seeds have been planted throughout the series foreshadowing her crazed mindset. And last week, Dany finally appeared to have descended into darkness when she lost the one advisor who had been by her side all this while. Missandei’s gruesome beheading unhinged both Grey Worm and Daenerys to a certain extent and as the episode opens, we get a sense that quite some time has passed. The showrunners attempt to portray a frail Dany, resembling the Mad King Aerys in his unkempt appearance from the books to a distant extent as the wheels begin spinning on whether Dany is fit to rule in her current condition.

Not all agree, and some pay the price for it. Lord Varys is dispensed off rather quickly for attempting to spread the word about Jon and trying to poison the Queen through his little birts in a prophesy that Lady Melisandre foreshadowed in the Season 7 Episode 3 The Queen’s Justice. Justice of the queen it is then as she has Varys burnt against a guilty Tyrion and a bewildered Jon, both of whom begin questioning their allegiances to the queen and wonder if they bent the knee to the wrong woman. Little do they realize they couldn’t have been more wrong as Dany wreaks havoc in the episode’s latter half. Fortunately, it does look like Varys was able to send word about Jon’s true legacy around Westeros and that should help rally some forces in support for a new King.

Like The Long Knight, most of the episode is spent around the Battle at King’s Landing and is consequently, helmed by the series’ battle expert Miguel Sapochnik. Under his direction, questionable writing choices and baffling character decisions are overshadowed by his superior handling of sequences, taking the pain away from some of the writing woes that we’ve seen on screen off late. The siege of King’s Landing then, begins with Dany’s Drogon laying waste to Euron’s Iron Fleet as the Unsullied and the Dothraki (who I thought had gone extinct) storm the gates of the city. Where Euron was able to take down Rhaegal with disappointing ease, Drogon burns down his entire fleet and all of Qyburn’s scorpions lie quickly in ruins. It’s another way for writers Benioff and Weiss to do away with some plot threats they introduced before they can race ahead to the real threat: Dany herself.

Looking at the Red Keep from a distance, something in Dany snaps and she begins burning down King’s Landing, much like her ancestors threatened to. The result is destruction that is both glorious and horrifying to witness; the aerial shots are majestic and easily rival a big Hollywood production in terms of scale while the grounded shots help convey the sense of chaos, claustrophobia and rampant disorder on the loose as we follow it through the eyes of Arya Stark. That’s Sapochnik repeating his long-take sequence that he employed in Battle of the Bastards and The Long Night and with help from Fabian Wagner’s excellent cinematography, we’re able to follow Arya as she witnesses the horrors of Dany burning down King’s Landing.

In essence, the gruesome casualties of war is what George R. R. Martin’s series has been about. The battles in Game of Thrones have always led to horrific outcomes and particularly harsh on the common folk and the soldiers who end up being victims of their kings’ idiosyncrasies, thereby showcasing that war is not good for anyone involved. This episode brings back the thought that no matter a Lannister or a Targaryen or a Stark, the common people suffer the most in war. The point is further propagated by Dany’s decision to burn the city to the ground after the bells of surrender were rung. That she chooses to ignore the city’s pleas for mercy makes her as tyrant as the dictators she’s planning on overthrowing.

It’s Daenerys snapping in a moment as opposed to in a build-up lasting over a few extra episodes that’s going to divide fans strongly. At one end, we could argue that Dany’s madness is something that has been foreshadowed for a long while now; every season has had her make choices that hint at her potentially going crazy in the future and one need not look further than the number of people she’s burned down to make a point, mercilessly at times. At the other end, despite those seeds laid down, you still feel a few additional episodes to take her trajectory into a downward spiral would have been far more effective than this streak of madness erupting from the flames in a spark. An entire episode or two could’ve been easily spent with Dany grieving Missandei, which would’ve only helped her instability ring home harder. The choice of a shortened run presents her temper exploding into a deranged state of mind as a rushed development that, while a great writing outcome, doesn’t have a well written ascent to it. It’s far too big of a development to happen over the course of a few days of time spent off-screen, especially when Daenerys began the episode espousing her “noble” cause and birthright to the throne, repeatedly insisting she’s different from her father.

Other writing malladies abound, especially in the curious battle strategies. A lot of characters and armies are reduced to mere props after series long build-ups, whether it’s the Golden Company and it’s leader Harry Strickland (who amounts to nothing more than a cameo at this point), or even Euron’s complete Iron Fleet, the scorpions and the Lannister armies, who could not be wiped out with two dragons but are easily defeated with one. The in-series explanation of course is that Dany would be more aware this time, having already lost a dragon. And even as it helps fulfill the prophesy of a single dragon’s shadow looming over King’s Landing that we’ve seen in past episodes numerous times, it still comes across as a bit contrived. Also anticlimactic were the fates of Cersei and Jaime who were sealed together, buried in King’s Landing, partially negating all prophecies and fan theories about the two (I say partially because technically, she was still taken down by a younger, more beautiful one as prophesized). I for one am not thoroughly disappointed by this though, since Game of Thrones had a tendency to do away with huge characters in a snap and the show at least lived up to that reputation as it demonstrated with these sudden deaths of Jaime, Cersei and her child (on Mother’s Day regardless). Who would’ve thought that Tyrion would be the last Lannister standing.

Benioff & Weiss also do not refrain from giving us fan service. Cleganebowl is finally a reality, and hyped up as it has been all these years, we’re introduced to an apocalyptic fight that visually, looks straight out of an art painting done by a venerable 16th century artist. The fight itself is as gross as it can be and has the trappings of GoT‘s typical violence and ends in a rather poetic manner that reminds me of the infamous Harry Potter and the Deathly Hallows climactic duel between Voldemort and Harry (that was never in the books to begin with). It’s still fan-service regardless for Sandor to come riding all the way from Winterfell to King’s Landing to get revenge on his brother considering all he’d been through up North.

Circling back to Martin’s thoughts on war, things get really frenetic down south as we see soldiers slashed, bodies burnt and innocents incinerated. The line between the good and the bad is blurred and even though we don’t feel the tension as much as we felt it in The Spoils of War, we still have two sides that we’ve followed very much through the series on opposite ends of the battlefield. And we find out, as we have before, that it doesn’t necessarily end well for either party. People are knocked out like garbage, entire life’s worth of stories and desires destroyed in an instant. And all for a chair made out of Valyrian Steel swords. War wreaks woe. This episode reinforced the notion, as Martin’s books have.

It’s becoming near difficult rating Game of Thrones episodes, especially the ones in Season 8. The writing has been largely inconsistent but the crew has refused to step down their game, only upping it with every successive attempt. On any other day, this would’ve been one of those hallmark Game of Thrones episodes that would be raved about, discussed and dissected to death, its twist serving as a chilling reminder of the looming Targaryen threat that no one really saw coming. But it’s unfortunately going to go down as the episode that shortchanged character arcs, dismissing some very important ones unsatisfyingly without giving them their final dues just so they could dole out some fan service. Evaluated purely from a writing standpoint then, the episode would be more of a 5 or a 6 than anything close to a 10.

Despite all its inevitable criticism though, I enjoyed and liked the episode. Quite a lot actually for the harsh amount of bashing it’s being subject to. For despite some flawed writing, it contained stuff the likes of which I haven’t seen on a TV Show before. And come to think of it, the outcomes themselves weren’t really as deplorable as their mushrooming. A 10-episode Season 8 would’ve certainly added a lot more weight to the goings on and made the overnight character shifts convincing. But we get what we get and next week will conclude the most popular series on television right now. To witness that, live, with millions of other viewers and after all these years, will be a moment in itself.