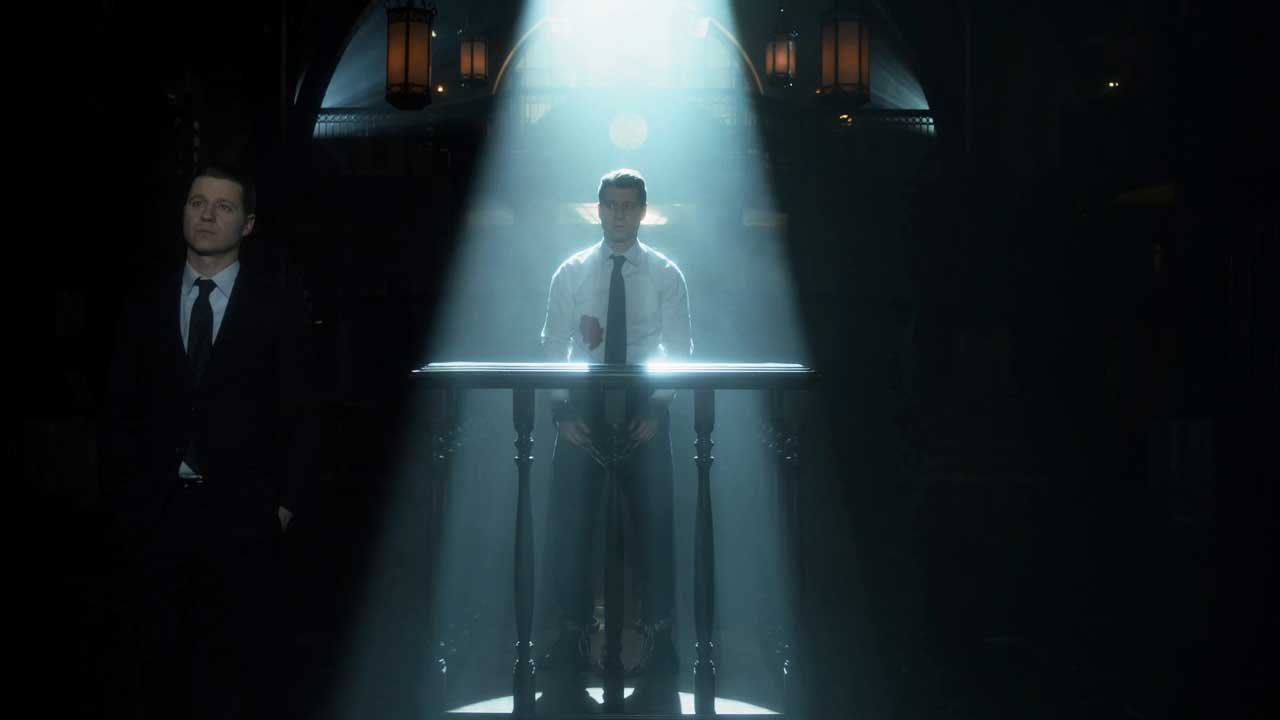 By all accounts, this was a stalling episode. Early in the hour, James Gordon is shot when convening a meeting of Gotham City’s criminals who look like a bunch of B-string actors straight out of a fancy-dress competition. He spends the remainder of the episode in a comatose hallucination “atoning” for his sins through a trial presided over by his evil counterpart. Meanwhile, Lee attempts to revive Gordon throughout the episode as Bruce, Lucius Fox and Victor Zsasz are taken in by Poison Ivy’s charming perfume, who now wants Gordon dead and Gotham reborn for messing with plants and mother nature.

The heart of the episode, also the title, is a trial that James Gordon goes through in his head when unconscious. If you’re wondering whether it leaves a lasting impact on Gordon who comes out changed as a result, you couldn’t be more wrong. The trial is simply an attempt to bring forth the many lives that have been lost in Gordon’s valiant attempts to act as a hero and do the right thing. Lee, Harvey and the burnt residents of Haven all confront Gordon at different points but it’s the orphan-boy’s interactions with James that hit hardest. Even so, they do not add anything significant to the story except for giving Gotham a chance to experiment with some trippy, psychedelic visuals that the episode takes advantage of.

In that sense, credit goes to Erin Richards who plays Barbara Kean for making a strong directorial debut on the show. Sure a lot of the template regarding the show’s structure and style is set this late into the game but it’s always a tough one when actors step in to take over the reins; and the show’s leads often own up to the proceedings, getting a lot more invested than simply acting their part. On that note, another actor contributes behind the scenes as the episode is written by our very own Gordon i.e. Ben Meckenzie. I’m not sure if this is his writing debut but it’s fairly competent to be honest. Not super-strong stuff, but it’ll do.

If you thought the dreams were trippy, reality isn’t much different either. Ivy has hypnotized a lot of people to achieve her goals and at this point, it’s officially safe to declare the GCPD as the most unsafe place in Gotham ever and it’s detectives, some of the most incompetent. Sample this: after Gordon is shot, Harvey barges into Penguin’s lair and punches him on the face, yelling and threatening at him and Barbara to reveal the identity and whereabouts of the shooter, only for Penguin to point to a window with a bullet hole. I mean, it’s so literally on the nose one could’ve easily figured it out were he not so hot-headed the whole time. I’ll give credit to Harvey for deducing Ivy’s involvement though, that one was a little hard to guess especially with someone like Zsasz. How exactly does Zsasz let Ivy close to her and trance her is beyond me though.

It goes without saying though that no one is harmed permanently through the episode. By the end, not only have we flash-forwarded to a month with no casualties (even Zsasz spraying bullets in the GCPD fails to hit a single mark), but Gordon and Lee are married. Possible one of the sweetest and happiest moments ever to grace Gotham, as unexpected as it is. Its warmth is accentuated further by Ben Meckenzie and Morena Baccarin having met on the sets of Gotham and sealed their romance with a real-life marriage. And with this season being the final season, what better way to send-off characters by giving them a happy moment to cherish. As Alfred explains to Lee in a touching monologue, it’s the small moments that you spend with the ones you love that count and go on to mean something.

And in a perplexing, yet brave decision, Lee has agreed to raise Barbara and Gordon’s child as her own. Although I doubt it’s going to end well since Barbara isn’t the one who’s just going to hand over her baby to Gordon without getting the spotlight. Her sudden infatuation with Jim is indeed a little confusing though; that point never really sat in well except to sort of ensure they stick to canon. It goes without stating that this entire subplot left previous week’s proceedings in the dust, with the Ace Chemicals spill-out and all not being referenced much; thereby also making it a standalone episode save for a few connected plot developments.

Gotham might have delivered a fairly decent hour but that’s about all there was to this week’s episode. The Trial of Jim Gordon didn’t add anything to the show’s overarching No Man’s Land storyline and I stand by my statement that this was just a filler episode, stalling the plot line perhaps for a few more episodes until things hit the roof. And with just three more episodes to go, we should be getting that intriguing prologue teased at the Season’s beginning anytime now.

That Captain Marvel Post-Credits Scene From Avengers: Endgame Has Everyone Hyped