Jessica Joens makes a tough choice yet again and pays the price of being a true hero. 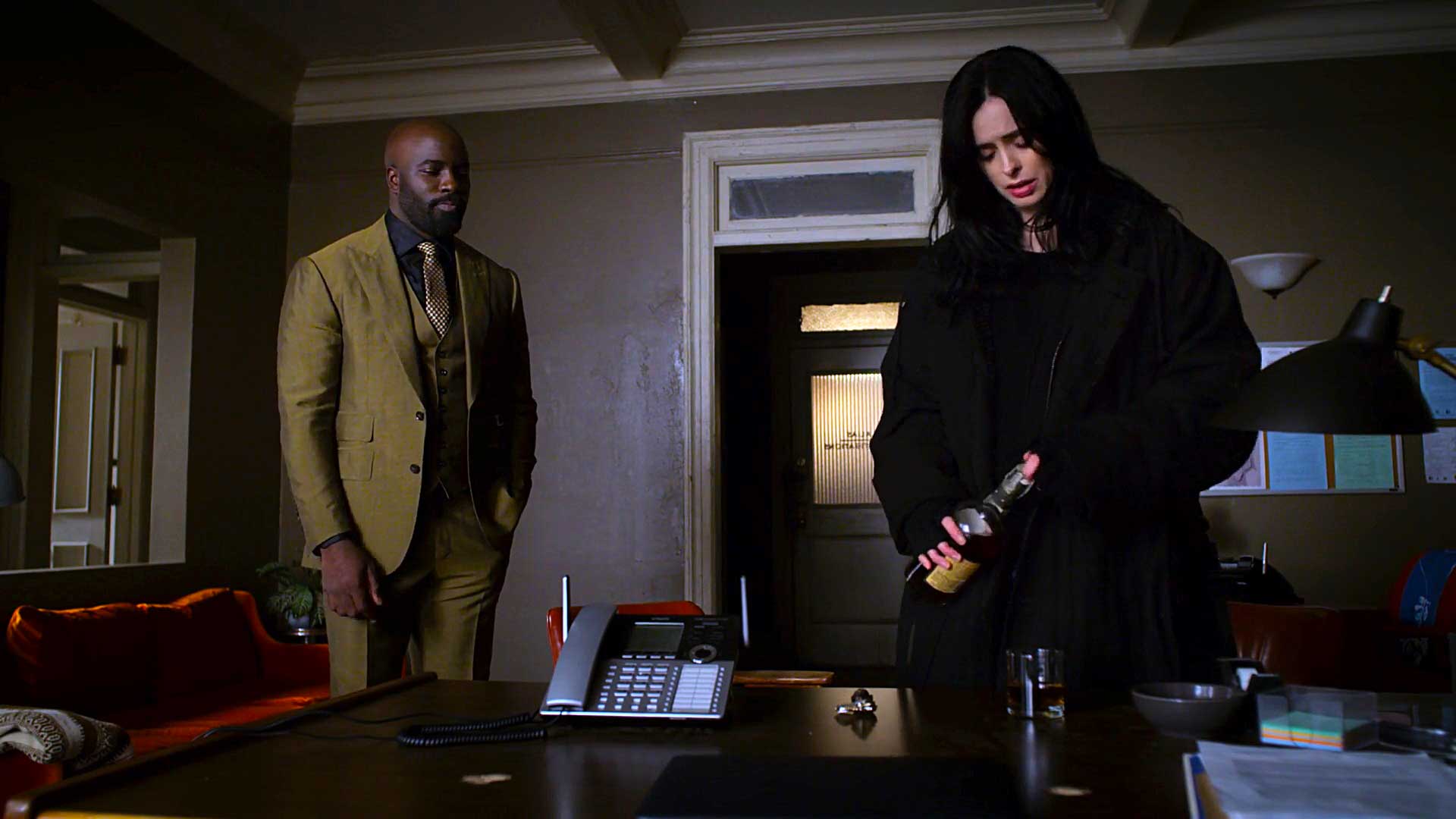 It was inevitable. After last episode’s shocking ending, there was no way Jessica Jones would’ve ended on anything less than a bleak note. A lot goes down in the final episode as Jessica is forced to make the heroic choice yet again, paying the price for giving a shit. Hogarth plays a central role in the narrative but gets a depressing ending of her own. And all of this with a cameo from Harlem’s new hero, our very own Luke Cage.

Jessica bringing down Trish happened with a lot of back and forth on both parties involved. There was a dance of stragetic moves, with Trish giving Jess the slip, followed by Jess unmasking Trish in a live video (I love how seamlessly Jessica Jones has integrated social media into its narrative). It’s when Jess threatens to do damage to Kith that things truly come to a head and she begins to blur the lines about the lengths she will go to for meting out justice. It’s also the point Jessica realizes that Trish is past the point of coming back.

Yet another clever depiction of how evil Trish has become comes from a timely use of Erik’s powers. He launches himself onto Trish and begins bleeding as profusely as he did when Sallinger neared him. It’s as once effective because we saw in earlier episodes how bad Sallinger really is and the damage he did to Erik. A similar injury from Trish at once makes the point clear.

By flipping the antagonist from Sallinger to Trish at the penultimate episode, Jessica Jones gives its lead a far more interesting battle to fight. Trish dances around the lines of evil and good until she steps further and further into the darkness. In one particular sequence, we see Jessica and Trish fighting in a pitch-black setup, with Jessica’s face lightened up, further pushing the notion of the light in Jessica contrasting with the dark in Trish. That Trish could see in the dark was a subtle clue out in the open about where she was headed all this while.

For some reason, the ramifications and implications of the episode’s events are far more interesting than the actual turn of things themselves. For the longest while, Jessica has regarded Trish as her sister; her and Dorothy being the only thing closest to a family she had after her mother. And by the time the season has ended, she’s lost both. It kinda explains why she prefers staying out of the hero business since it always ends with horrible repercussions. Trish’s slow descent into madness from her euphoric beginnings in the episode has been quite a journey and by the time she comes to the harsh realization that she’s the bad guy, it’s almost as if Hellcat’s origin story is complete.

Hogarth gets a major role in this episode and is often pivotal to nabbing Trish. As cold and calculative as she has been, it’s still brutal to witness Kith not caring as much about Hogarth after all she did for her. And true to her syndrome, Hogarth gets a tragic ending as Kith leaves her to die alone with ALS. We’re never explicitly shown what becomes of her fate but the ending coupled with Carrie-Ann Moss’ remorseful, followed by angst-ridden performance leaves a lasting impression.

There are some fairly good setups in place for future episodes, had Netflix not cancelled the series. However, there’s a much bigger sense of closure in Season 3 considering the production team were probably aware of the show’s imminent axing. When Jessica switches off the lights in her tiny Alias Investigations apartment and walks out, I couldn’t help but feel huge bouts of emotional at the metaphor for the curtain being drawn on the Marvel Netflix era. We’re left with Malcolm running Alias, Detective Costa and Erik Gelden teaming up to fight crimes and Trish taken to the Raft, one of the few remaining connections to Marvel’s movie universe as the prison introduced in Captain America: Civil War. And the ending is deliberately left perplexing and ambiguous with Kilgrave’s voiceover by David Tenant adding to its mythical qualities.

It wouldn’t have been a show without at least one Defenders appearing and Sweet Christmas, we get Luke Cage himself in all his glory. Carrying over from the end of Luke Cage Season 2, Carl Lucas is now Harlem’s hero and official “king” if you will. Decked in a golden colored suit, he visits Jessica to dole out some advice as the duo reminisce about their time together. Their interludes are witty, alluring simultaneously to the situation with Trish and their own brief fling, with Luke showing a tinge of jealousy and remorse presuming Erik to be Jessica’s new man (he surely keeps tabs). That said, Mike Colter’s fitting appearance has a lifting effect in the final hour and it thankfully doesn’t distract from the main narrative, with his role being restricted to a strict cameo.

Jessica Jones wrapped up its Season finale on a fairly tragic note. Being a hero is never easy and often demands paying a strong price. Showrunner Melissa Rosenberg understands that, as well as gets the pulse of what makes Jessica Jones tick. Throughout the show, we’ve seen strong performances by Rachael Taylor, Carrie-Ann Moss and Krysten Ritter who displayed serious raw emotion in the face of some tough truths to swallow. In the end, it’s been a highly satisfying watch and while I can’t really say the show goes out on a high, it ends on a stirring moment that inspires confidence in Jessica Jones.

And that’s it from me, signing off on reviewing Jessica Jones as well as the Marvel Netflix series of shows. As of this point, the shows are officially cancelled. But I pray and wait for the day this statement and sign-off of mine becomes obsolete and we see all six series – Daredevil, Jessica Jones, Luke Cage, Iron Fist, The Punisher and even the crossover show The Defenders back in action at some other streaming platform. Until then, see you folks.

Marvel’s Jessica Jones Season 3 Review: The End Of An Era