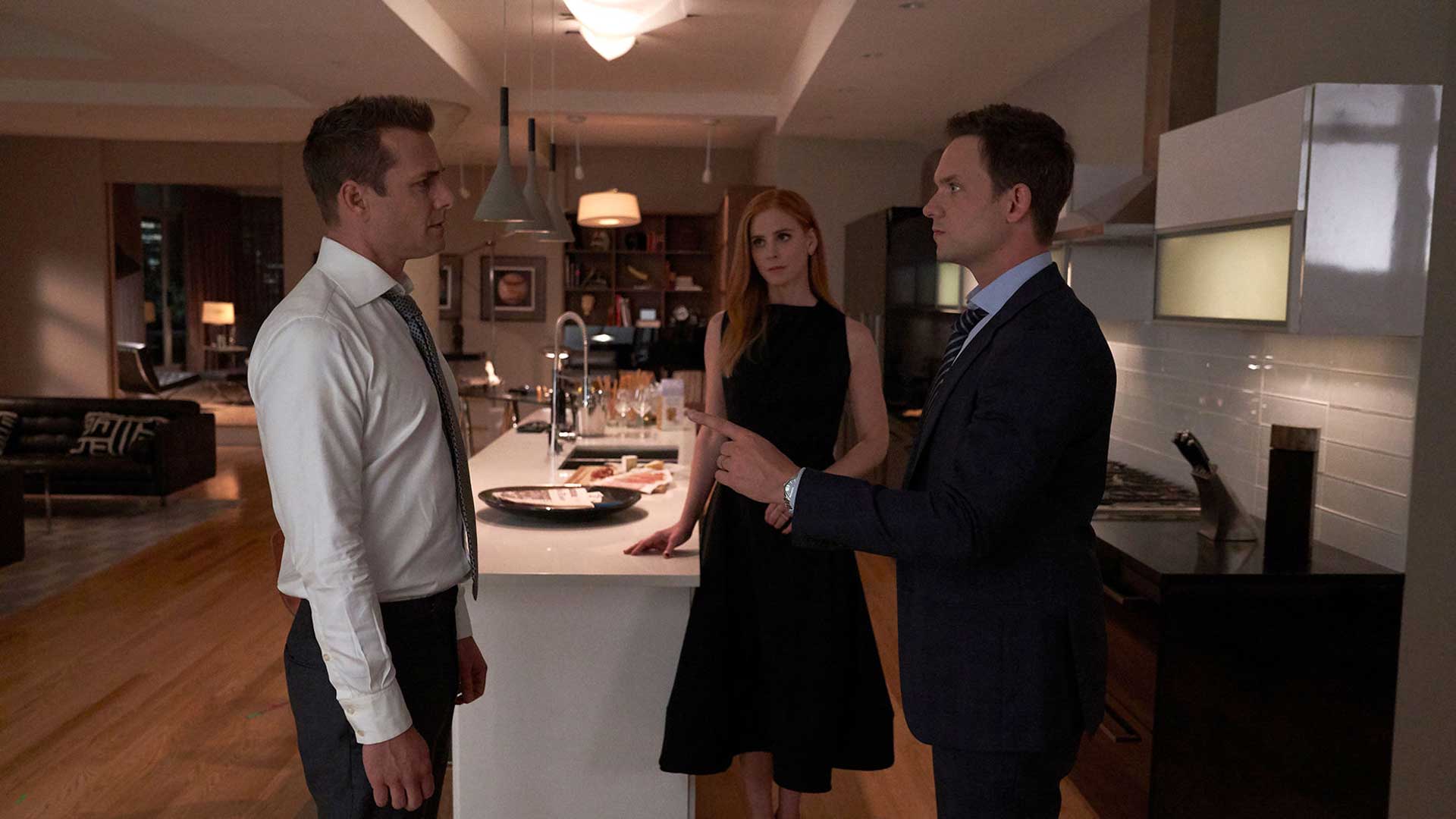 Patrick J. Adams is back. Or was. Suits finally saw the long-awaited return of Mike Ross as he crossed paths with Harvey Specter and his new partner and new series regular Samantha Wheeler. Louis meanwhile struggles with handling a pregnant Sheila whose situation is leading to some unpredictable behavior as Donna helps Katrina get out of a tough personal situation. All in a day’s work for showrunner Aaron Korsh and director Christopher Misiano.

Undoubtedly, the focal point of today’s episode was Mike Ross and his return into Harvey Specter’s life. The duo hit it off, throwing jabs at each other through Movie and TV Show references (Survivor was brought up) as they caught up on their old times. However, Mike wasn’t just here to reminisce about the time spent with Harvey, he was here to fight a case against one of his clients who, Mike firmly believes, is harming his own client’s workers by providing unhealthy, unsafe working conditions.

The resulting back and forth brings Mike face-to-face with Samantha, perhaps the moment I was waiting to see unfold. What’s peculair is Mike’s grown increasingly cocky and a lot more arrogant bordering on the Harvey Specter we saw back in the old days. With Samantha being a bit of a hot-head herself, things don’t exactly go well between the two to no one’s surprise. Lots of back and forth, deception and some clever tricks carry the case forward throughout the episode.

For some reason, Mike’s character felt off in some ways for better or worse. It’s as if the time away in Chicago and his success in his personal and professional life had changed him as a person, a fact he acknowledges to Harvey. Mike wasn’t necessarily known to be humble but he did had a certain likeable streak to him that this episode sort of stripped off. Both Mike and Samantha pulled off unfair moves in a bid to emerge winners and as Mike walked away a disappointed man, Samantha walked away losing her job, with Faye once again being the one to deal the damaging blow and closing out the episode.

The episode wasn’t all about Mike entirely as we got to see Louis struggle with the swinging bouts of Sheila’s behavior. Clearly pregnancy is taking a toll on her and she’s coming to terms with the realization that it’s incredibly difficult for her to balance it with work. It takes a therapy session with Litt’s Dr. Ipschitz for her to open up about it; consequently, seeing Louis support her wholeheartedly is a great sequence. If there was any doubt about the incredibly journey that Rick Hoffman’s character has had, his handling of the situation should probably settle it for good.

Katrina had a weird thing going on when she found herself struggling to contact Brian and drop him a simple, cordial voicemail. I have mixed feelings about her subplot; while there is the element of Katrina discovering herself as a person as we get some insight into her personal life and past relationship, it also felt tonally off from the rest of Suits as a whole. Perhaps director Christopher Misiano was trying something, referencing a different series with those montage of cuts of Katrina desperately trying to get her message right without sounding overtly attracted to Brian but it didn’t click with me. Also, it’s kinda weird for her to still have any level of fascination with Brian seeing how he’s already married and he lost his job due to this unfortunate attraction. Man, the partners on Suits sure can get selfish.

Patrick J. Adams is comfortable in the role, with the ability to slip into his character with ease. While his chemistry with Harvey was pure fireworks, it was still kinda underwhelming to see his eidetic memory not being put to any use. Suits having moved away from those “fantasy” concepts could be responsible. Regardless, Mike Ross’ return made quite an impression, if not the enthusiastic comeback I was so excited about. Perhaps Suits really has moved on without Mike and at this point, his return is more about bringing older characters back one last time for nostalgia’s sake. His return did spin out a series of events that culminates in an important fate for Samantha so it had some importance at least.

Overall, an enjoyable episode but not for the bits I expected. Quite surprisingly, I found myself gravitating more toward Louis’ dilemma since his situation was the one that felt the most grounded and genuine. Speaking of which, Dule Hill’s Alex Williams delivered what was probably the most sensible piece of advise Louis could ever get in a situation like this: When it comes to dealing with pregnant wives, listen and do nothing. Because what they really need is a shoulder to vent their frustrations on.