The Walking Dead Season 8 Episode 10 Review: The Lost And The Plundered 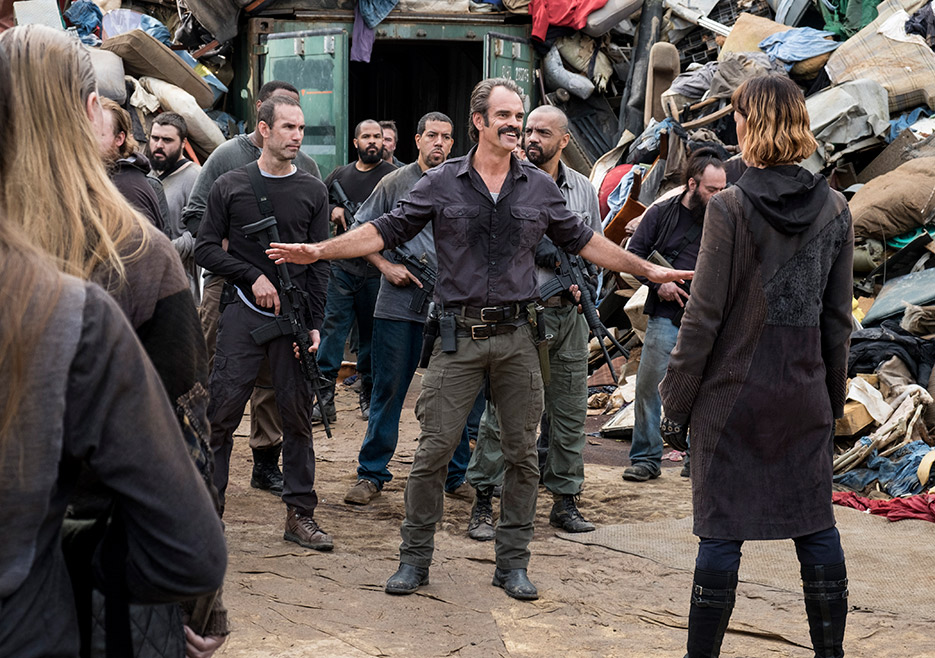 Man what was up with those title cards in the episode? As with a lot of bizarre editing choices done on the show, this one consistently played with my expectations and it still feels like I haven’t figured out exactly why they were used. When the first one for Michonne showed up, I thought it was about the people whom Carl had written letters to before he met with his fate last episode, and that each episode would end with one of the letters being read (Rick’s being the last one). Then the second one popped up for Negan, almost confirming my theory. But by the time one for Jadis showed up, I was convinced this wasn’t the case (unless for some strange reason, Carl would write to Jadis). It seems hard to believe they were simply used to make the switches between character viewpoints more effective; perhaps it was to hammer home the point that the character in question is going to undergo a major development.

Anyhow, coming back to the main episode, it was a traditionally slow episode in line with the show’s standards that partly dealt with the aftermath of Rick losing Carl while also focusing on some of the side-plots among Negan’s crew, the Oceanside community and the Scavengers. The Oceanside plot was the dullest of the lot and basically saw Enid talking her way out of a hostage situation where she and Aaron were held captive by the community’s women for the death of their leader. Despite being let out with a stern warning, Aaron is hellbent on securing their support in the fight against Negan and chooses to stay back. The Walking Dead has been having plenty of characters defy common sense this season, making choices to conveniently drive the plot forward and Aaron was not even the only example this hour.

Perhaps the most interesting developments happened with Negan and his crew. We’re seeing a different side of Negan this season and it certainly seems like a deliberate attempt to lead us into believing that there could be a shot at Negan and Rick coexisting peacefully together as the outcome of the All-Out War story-line that’s being played throughout Season 8. Negan’s motivations are also spelled out a bit more explicitly after we already saw them revealed in the last two episodes: he’s literally out there to save people both from themselves and from the horrors of life outside with the walkers. Something from Negan’s past experiences has probably led to his understanding that people need to be controlled and tamed for their own safety and it is in the best of their own interests if they surrender to Negan. He considers them to be resources which can be used productively and rather than slay all and create a massacre, he prefers to take out just one or two from a pack to force them into submission. 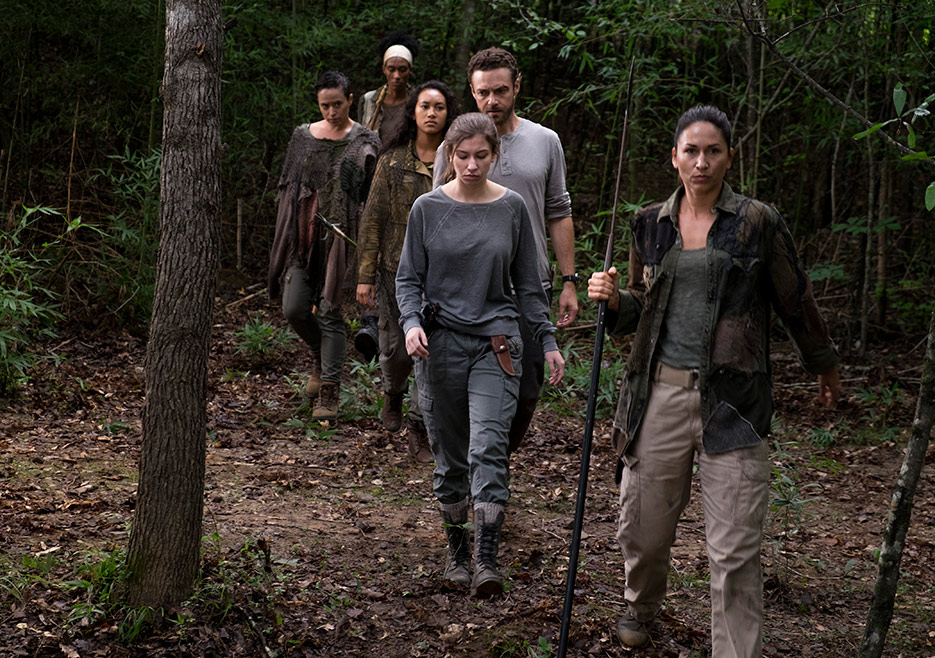 This is where we see cracks develop between him and Simon. Simon prefers the all out violent approach of kill-em-all to make ’em surrender. He goes nuts when he sees one of his own men in a coffin sent to Negan by the Hilltop and wants to go all guns blazing. And despite being laid out with a lack of subtlety, there’s a rivalry developing between the two, one that could eventually see Simon turn out to be the main baddie as Negan transforms on a path towards peace. Jeffrey Dean Morgan’s performance is such that he actually makes you believe there is a shot at Negan surrendering arms and wanting to give up the old ways, despite him having mercilessly and ruthlessly bashed Abraham and Glenn in the Season 6 premiere.

This makes the show’s climax particularly interesting in how it presents an almost swapping of viewpoints. The scene in context is a call over walkie-talkie between Rick and Negan about Carl’s death. Rick almost seems to have toughened up over losing his son and even though he looks distraught, he’s determined to get revenge by killing Negan going right against Carl’s last dying wish of a peaceful future. On the other hand, it is Negan who offers a much-needed compassionate response and (rightfully?) blames Rick’s failure as a leader and a father for the loss that could have been avoided. Is Negan turning into Rick and Rick into Negan? It’s hard to believe the show would pull out such a transformation but their contrasting responses to Carl’s death are nevertheless intriguing to watch. We do get a heartless response and a heartfelt sympathy from both men over the loss; just not the responses we expected from them.

Finally, we learn a lot about Jadis in this episode. Interested in art and painting, she and her Scavenger crew deliberately chose to shield themselves from the outer world by creating their home in their own isolated junkyard. The scene between Simon and Jadis plays out pretty much in character and much like Rick being responsible for Carl in a way, Jadis is responsible for what plays out with her family when she foolishly hands over the guns to the Saviors (another convenient plot contrivance?). Having Jadis grind the reanimated walkers gruesomely has to be one of the goriest scenes this season has featured and that’s saying something for a show like this. 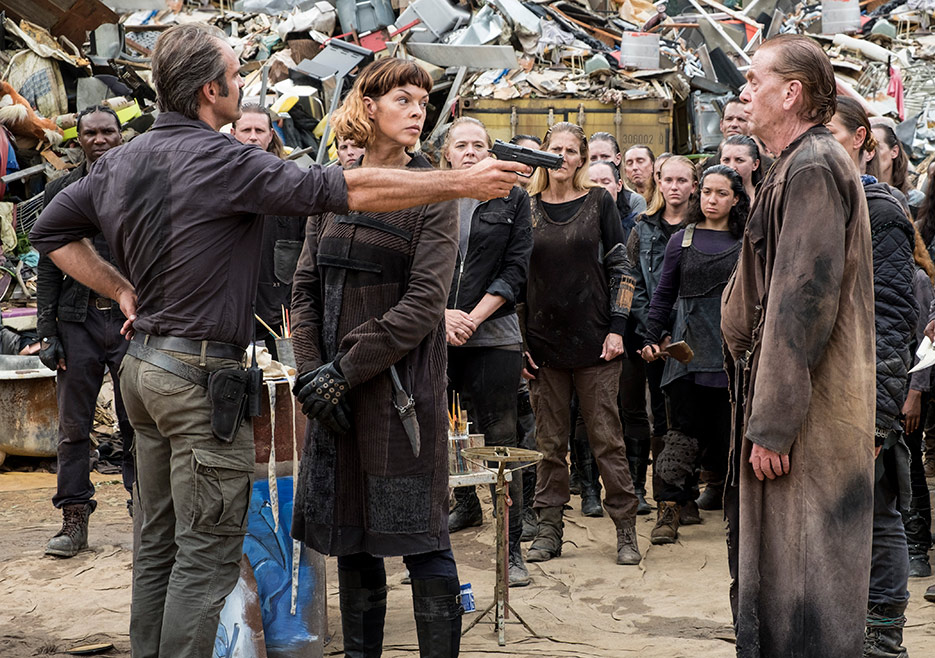 Despite slowing things down by several notches, The Walking Dead gave us an episode of important character beats. We learned more about Jadis, Simon and especially Negan and all those bits of revelations will undoubtedly play an important role in the episodes to come. If only the show would up its pace a bit, the All-Out War arc would’ve been over by now.

New details on the Avengers: Infinity War Battle of Wakanda