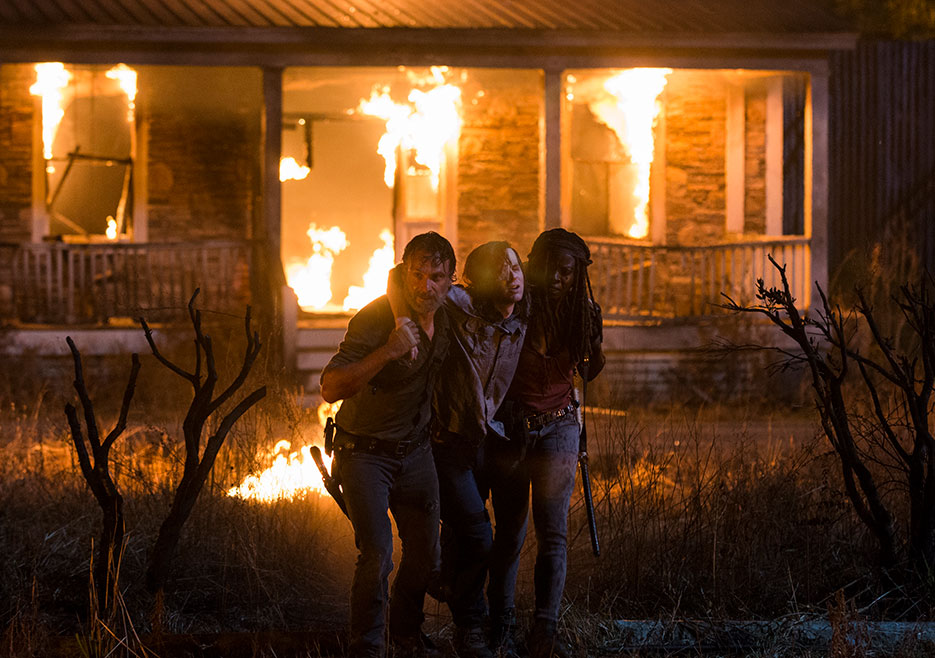 In the final moments of its mid-season finale, The Walking Dead set up the departure of one of the show’s perennial and central characters. It was a shocking revelation, not least because the said character is still alive in the comics on which the show is based, and which it is following closely for the large part save for some deviations here and there. But the subtlety with which the revelation was delivered under the confines of a sewer at the episode’s closing minutes with the camera then panning back and lingering on for what seemed like eternity really hit hard. The mid-season premiere follows up on that arc immediately as the episode is dedicated to give the character a fitting send-off. This is probably your last chance to turn back now for the discussion that follows will be filled with spoilers for the show.

Honor keeps its narrative streamlined to two threads. Chief among the two is Carl’s fate. Rick’s son was bitten by a walker in Episode 6 (The King, The Widow and Rick) when trying to rescue Siddiq and get him back in his group, despite his Dad having shooed him away in the season’s second episode. At the time, it looked as though Carl had escaped unscathed; turns out he hadn’t. Since being bit, he’s been spending time with Judith, writing letters to his loved ones, and in general admiring and enjoying life’s final few moments before embracing his untimely fate. This extended prologue opens the episode and also gives us more flashes into Old Man Rick’s storyline. We see Rick moving around a utopian Alexandria where everyone lives in harmony under the compassionate rule of Rick. The rest of the episode involves Carl saying his goodbyes, people in tears and lots of emotional moments as Carl tries to impart some sense into his Dad on a potentially alternate way of life in the midst of chaos, one which need not involve as much killing as we’ve seen in the All Out War arc.

The Walking Dead has often used death for mere shock value. Whether it was Herschel in Season 3 or even Abraham and Glenn in the bloody Season 6 premiere, people have frequently lost their lives because the show had enough characters to dispense with. This one though feels earned and important in the show’s current context, never mind the questionable circumstances befalling it. The show seems to have had enough of blood splattering and is hinting at a future where whatever remains of humanity exists in harmony. This according to Carl is the pragmatic approach out of this mess, even if a similar path has been visited before by Rick himself, who was the chief proponent of a merciful and moralistic leadership until his brush with Negan and his pursuit of the Saviors stripped him of his conscience to a significant extent. Something big needs to happen to make him rethink his approach and for him to avoid getting lost in the abyss of a murderous path and Carl’s death should hopefully help knock some sense into him. It’s not going to be a flip switch moment and it’ll take a while but after promising Carl that he’ll deliver on his vision of a peaceful community, Rick’s gotta do something to make it count. 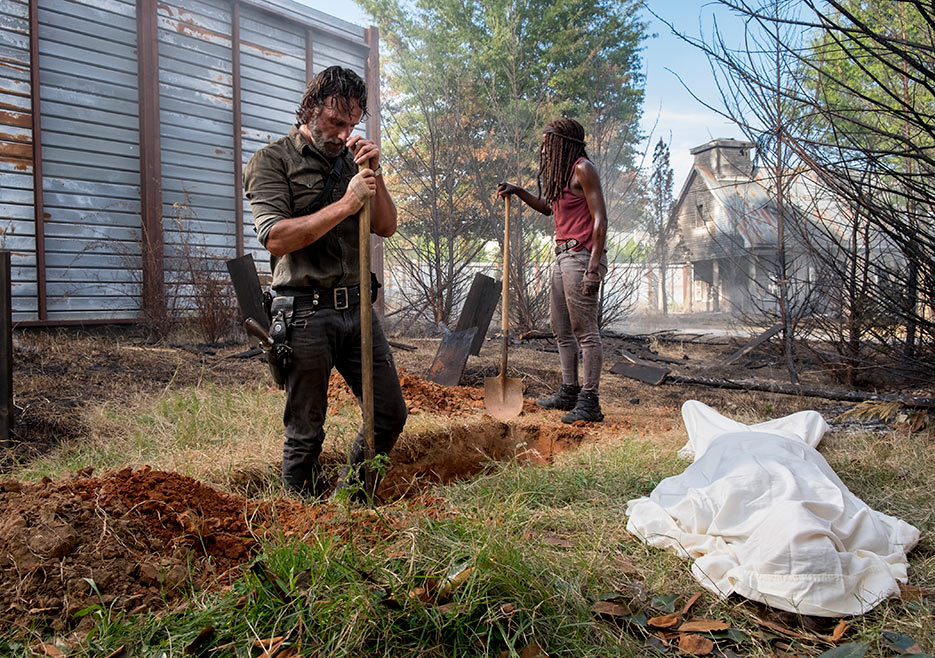 The moments shared between the central members are poignant indeed, especially the final 10 minutes or so which really hit you hard, which is rare for a show that has this many characters to care about and where the last major death was a long while ago. Some loose ends from prior episodes are also tied up neatly; for instance, we realize that the Old Man Rick flashes are Carl’s vision of what he wants the future to hold and the opening moments explain some of Carl’s out of place sequences from the last three episodes. Siddiq pouring his heart out to Carl and extending his gracious thanks for saving his life is extremely touching and Avi Nash gives a restrained performance while leaving a strong impression. As do the trio of Rick, Michonne and Carl in the tender moments they share with each other. In hindsight, it’s heartbreaking to see the kind of stuff Rick’s been through in the last eight years or so; he lost his best friend, his wife and now his son. The apocalypse really takes a toll on you.

The other plot thread that continues throughout the episode involves Carol teaming up with Morgan (who escaped the Saviors’s sanctuary) to take down what’s left of the Saviors and rescue Ezekiel. As the story progresses, Morgan’s kills become increasingly gruesome and at one point he rips off the intestines of one of the Saviors in rage. It’s towards the very end of this bloodbath that Morgan’s conscience awakens and he hesitates to kill the last of them, only for Henry the kid to stab him from the back. There’s little that happens here in terms of the story progressing except Morgan finally snaps out of his killing rage and (possibly) comes to realize a middle-ground can exist between Akidio and Terminator. On a side-note, Ezekiel spouting Shakespeare in the face of a rattled Gavin was simultaneously enjoyable and exasperating to watch. 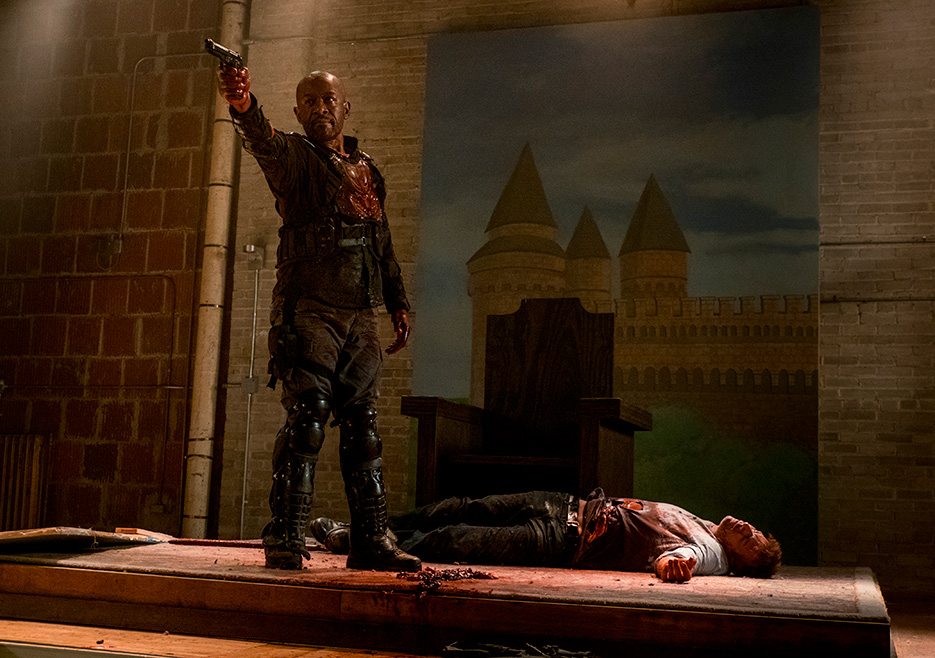 The two narrative strands are cross-cut with each other to convey the dichotomy of the central protagonists Rick and Morgan. On one hand Rick’s being taught by his son to find a better way out of this war and work towards peace. On the other hand, Morgan gradually and steadily loses it until he reaches a similar point of realization as Rick does. Both arcs have kids that either have taken a life, or do. Hopefully once the All Out War is done, the two will work together to establish solace in Alexandria before Lennie James moves on to playing Morgan in the spin-off show Fear The Walking Dead. Despite the presence of these two threads, the episode definitely could’ve benefited from a tighter run time and more contained dialogue; it would’ve helped Carl’s fate hit have a more lasting impact since after a few lines of heavy breathing and dialogue, it can start to get a bit tedious.

Regardless, this was one of the better episodes of The Walking Dead after some middling to disappointing episodes of Season 8. The season which began with a bang, quickly settled down into slow-moving fare. Honor, despite not progressing the plot by much, delivered an episode that really hit all the right emotional notes and gave a poignant and respectable send-off to Carl Grimes. Here’s hoping in a bid to tie up the All Out War story-arc, the episodes ahead become crisp and respect their run time a bit more.