Last night, Christopher Nolan’s Interstellar was screened at Liberty Cinema in Mumbai as part of the acclaimed director’s visit to India. Nolan himself was present at the occasion to address the audience. I was able to attend the screening and thought I’d share my account of how it went down. While it’s difficult to recreate the magic of the experience through words, it’s worth giving a shot.

To provide some background, Christopher Nolan arrived in India on March 29 for a short three day trip to promote the preservation of film and the viability as well as superiority of celluloid as a medium to shoot movies on. In between his packed schedule involving press conferences, a talk at the NCPA theater discussing film, meeting stars and directors of the Indian film fraternity and attending dinners and lunches hosted for him, there was word that two of his movies would be screening across theaters in Mumbai, India. Furthermore, it was expected that Nolan would attend both the screenings, walk the red carpet and address the starry-eyed audience. Too tempted to resist the opportunity, I managed to grab tickets to the event and planned a trip to the venue with my beloved wife. 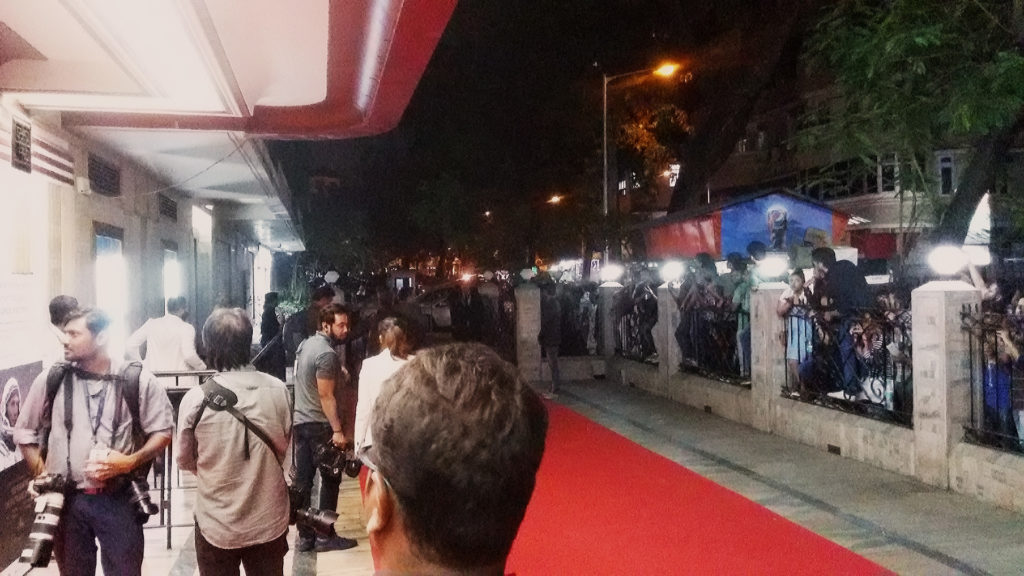 The event was officially slated to begin at 8:30 PM. Our punctuality elevated to its zenith, we managed to reach there well in advance at around 7:45 PM. The theater was decked up Broadway style with hoardings of Interstellar emphasizing the 35 mm aspect of the screening. Unsurprisingly, ticket prices were no deterrent and people turned up in spades awaiting the maestro’s entry. Most of the audience comprised of 20-35 somethings who had come with all sorts of goodies to try their luck at getting Nolan to sign on their posters and artwork. One person had a book on the shooting script of Inception and one lady supposedly even came with her own script in hand, possibly hoping to rope in Nolan and his wife Emma Thomas as producers for her project. Soon after, the red carpet was spread out on the ground signifying Nolan’s nearing arrival. The crowd immediately got wind of this and rapidly occupied the surrounding area although it would be a good 30 minutes before Nolan would make an appearance.

After several chants and photographs taken, Nolan finally arrived with his wife Emma Thomas. Dressed in his usual combination of blazer and shirt he was accompanied by Shivendra Singh, founder of the Film Heritage Association and waved at the crowd sending them into a frenzy. He responded in kind to the greets with a Namaste gesture. We were hoping he’d complete the red carpet walk which would’ve given us a closer look but perhaps the increasingly unruly nature of the crowd compelled security to usher him inside through the back door. What followed was a mad rush by everyone to get to their seats before Nolan commenced his address.

After having a short meal, Shivendra Singh took the stage to say a few words about the screening before summoning Christopher Nolan and Emma Thomas on stage. The duo received a standing ovation and then went on to introduce the film to the audiences. Nolan explained the significance of the 35 mm screening, stressing that he intended for audiences to see the movie in this format (i.e. film over digital). He even revealed that Interstellar originally did not have a 35 mm release in India in 2014 making this the first time this science fiction epic will be shown on film in the country. The trio thanked the audience before being escorted to their seats once the movie began.

After a thunderous applause at the movie’s start, everyone was quickly absorbed in the film, despite having already seen it multiple times since its release. The print itself was impeccable and Nolan revealed in his address that it had been specially flown in by Warner Bros. for this event. In fact, a few Warner Bros. representatives were also present at the event and I was half-tempted to ask them about the release of Ready Player One in India. A few visible scratches and speckles aside the film print rivaled, and at times even exceeded its digital counterpart in how stunningly clear a picture quality it offered. Somehow the image came alive on film with the occasional flickering on screen and the skyline glimmering when the camera lingered on for too long. And the movie blasted through the speakers with an amazing stereo surround mix that blew almost all of my recent audio experiences out of the water, although I suspect the theater itself might have had as much to do with it as the movie’s print. As for the movie itself, it was gripping throughout in terms of both narrative and emotions and I thoroughly enjoyed it despite having already seen it during its 2014 release. As for my wife, she was watching it for the first time and was equally spellbound by the experience.

Apparently, sometime during the movie’s screening Nolan and crew had left the venue. Understandably, it was too late and Nolan had a big talk coming up the next day. We returned home, our hearts content, minds expanded and imaginations fired up being thoroughly satisfied with both the movie and the experience. After all, I had just managed to be in the same room as the director I admired the most and I retired for the day with stars in my eyes.