Political machinations and lots of scheming make this a more traditionally rooted Game of Thrones episode. 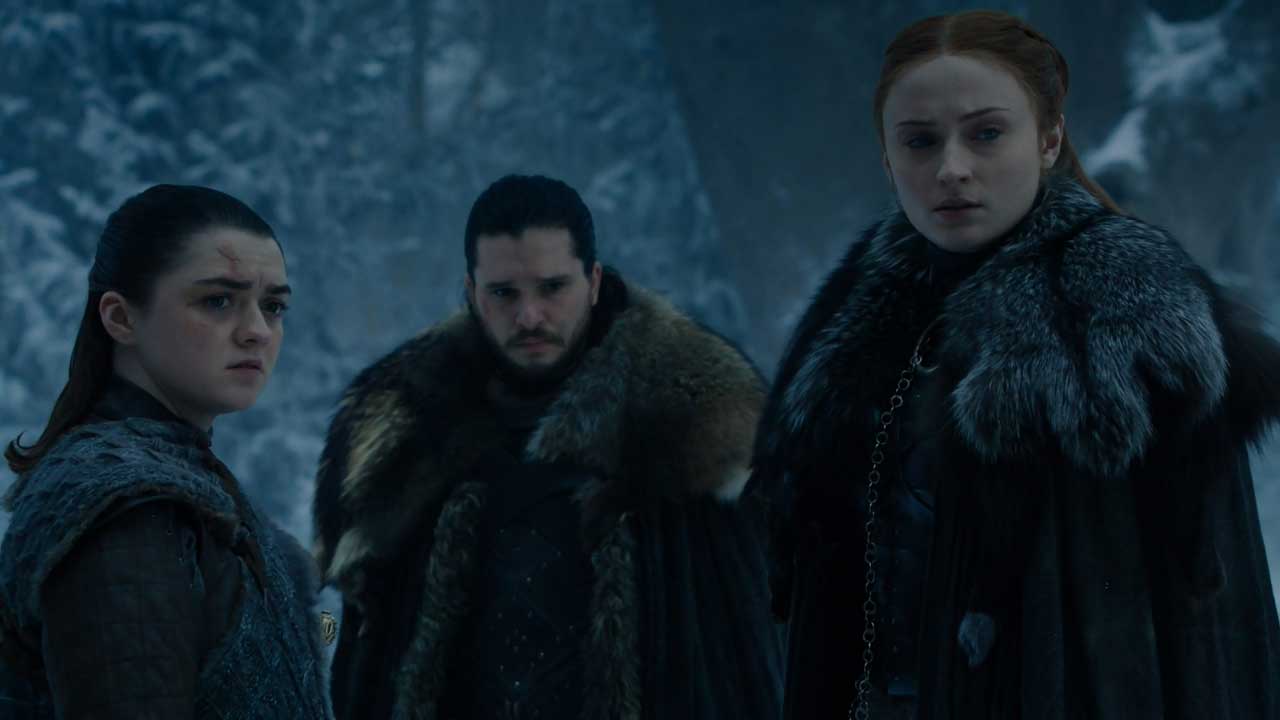 There’s something quite dispiriting about the episode’s forsaken title. It lets sink in how long a way we’ve come from the season premiere, where the Stark family flourished with both parents watching over their children. And here we are now, eight years later, having lost the parents and two of the brothers, with one Stark a crippled Three-Eyed Raven and the other a clandestine Targaryen. Ladies Sansa and Arya are all that’s left of this once prestigious house and Arya certainly isn’t interested in advancing the Stark line any further as evident in her rebuttal of Gendry’s marriage proposal (not that she could anyway). We truly are witnessing the last of the Starks.

That central moment in which all Starks convene for an important discussion kind of forms the focal point that bifurcates the episode. The moments before this confrontation deal with the aftermath of last episode’s incredibly dark (pun intended) Battle of Winterfell whereas the moments after spin the wheels of political machinations, surreptitious behind-the-back plotting and treasonous scheming that made Game of Thrones so compelling to begin with. The two halves are so distinct in their material that you’d be mistaken for doubting they were written by the same pair of writers. They both impact viewers at varying levels and in some ways feel like two separate halves of a movie strung together

Dealing with the Night King’s defeat goes as we expected. The dead are grieved by their closest allies as a subdued drinking celebration follows soon after. Whether it’s both the queens (Daenerys and Sansa) shedding tears for their lost friends (or those they friendzoned) or Sam and Arya remembering those who died protected them, everyone gets a moment to be remembered. The characters regroup, feast and the episode largely meanders around this section, dragging it presumably to let the impact of the battle’s consequences sink in but also because there’s no more story left to tell. The episode takes its own sweet lethargic pace to recuperate even as some wheels begin spinning when Daenerys, in a politically motivated move, legitimizes Robert Baratheon’s bastard Gendry as his true heir and annoints him Lord of Storm’s Bay. It wins her an applause and hopefully, Gendry’s loyalty which could’ve been interesting seeing as Gendry loves Arya Stark.

It’s baffling how much of fan service Game of Thrones has doled out in its later seasons. Where Martin was notorious for making viewers desperately want something and not giving it to them, showrunners Benioff & Weiss have gone all out in embracing some of fan’s wildest desires. Whether its Tormund having a thing for Brienne, or the inevitable hook-up between Brienne and Jaime ever since they’ve been sharing glances at each other when they were imprisoned together, to even Arya and Gendry, it all comes together a bit too conveniently. In these moments, the dialogue often leaves a lot to be desired but that’s a complaint I’ve been making for far too long though so I’d best not delve too much into it.

Once all the celebration is done, the politics of battle and planning and ruling kicks in, spicing things up a bit. There’s a constant sense of fear and paranoia gripping each of the principal characters, but especially Sansa and Daenerys over each other’s underlying motivations, hinging over their differing ways of placing their trust in Jon. Jon meanwhile finds himself sitting on an Aegon bomb he just cannot shake off. Ever the lad who speaks the truth, he feels the strong urge to let it out and at least let his Stark siblings know. It’s a move that’s incredibly selfish for Jon but also true to his character; he cannot live with the guilt of deliberately concealing his true lineage if it eats him from within, even if it comes at the cost of destabilizing the political balance of the Seven Kingdoms.

Of course word travels fast in Westeros and before we know it, Tyrion and Varys become privy to this knowledge as well. In the words of Varys then, this knowledge becomes information and, depending on how they choose to act on it, can become vital in providing them an answer to deciding the fate of the Seven Kingdoms. It’s also somewhat convenient that the last few episodes have seen Dany display that streak of madness that her ancestral Targaryens so governed by. Between that, the deal between Varys and Dany and Varys’ love for the realm, it sets up a potential dilemma for Varys to side with Daenerys or overthrow her and use Jon’s lineage to name Aegon the rightful ruler of the Seven Kingdoms. It’s an interesting, even if a bit contrived writing device, to add some mystery to the question of who will sit on the Iron Throne; right now it looks like it could be any of the three.

Speaking of contrived writing mechanics, the showrunners use the pen-penultimate episode of the series to conveniently dispatch and retire certain characters to their fates. Tormund decides to march off to the North, toward Castle Black, where the true home of the Wildlings lie. What’s baffling is sending off Ghost with him, as if they couldn’t find any use for him. And what’s further infuriating is Jon’s refusal to even hug the direwolf one last time, the animal’s torn ear and his sad expression kind of mirrored my own. While I understand direwolves have been difficult to CGI and composite on the show (which explains their sparing use), it’s just ruthless to send off poor old Ghost like that and leave him vastly underutilized. Another creature dispatched to save the production some effects costs is Rhaegal; Jon’s dragon blindly flies toward an attack by Euron’s fleet which, for some reason, they just didn’t see coming. It’s a travesty of writing choices that Rhaegal dies so abruptly; consequently his death doesn’t even sting as much as Viserion’s did. The attack leaves the Targaryen fleet overpowered by the Greyjoys as Missandei ends up Cersei’s prisoner.

Now that decision in turn gives us a devilishly riveting episode finale; in fact the final moments of the episode are among the best in this short season run and rival last week’s in terms of suspense and build-up. A really terse confrontation between two of the cleverest Hands of the Queens in Tyrion and Qyburn followed by Tyrion trying to appeal to the mother in Cersei even as she holds Missandei prisoner leads to a scenario packed with tension. Director David Nutter (The Rains of Castamere, Winterfell) builds up the scene masterfully, never once letting you veer on either side and delivers the outcome surrounded by some great reaction shots, especially from Jacob Anderson’s Grey Worm that once again, elevates what could’ve otherwise been standard writing into a great sequence worthy of a place in Game of Thrones‘ hall of fame. Djawadi underscores the moment with a haunting score that maintains its position by lurking behind the scenes as opposed to leaping out in your face.

With so much at stake, I often wonder if the words of Westerosi Kings and Queens or even people at power mean something, should the people have chosen to ignore them. In the episode’s beginning, Daenerys might have legitimized Gendry but does a self-proclaimed Queen’s word really rid him of his bastard parentage? In the final moments, both Tyrion and Qyburn ask each other to surrender for the “safety of the realm” but what makes one Queen worthy of another? It takes me back to Jon Snow’s words in the Season 7 finale The Dragon and the Wolf, where he aptly states that words stop meaning something if people don’t live by them, while also harkening back to Lord Varys’ words about power residing where men believe it resides. At this point, there’s at least one good thing Game of Thrones has done and that’s making us question the choice of either Daenerys or Cersei as the rightful ruler of the Seven Kingdoms; one is willing to use the people of King’s Landing as a shield to provoke her opponent while the other is mad and angry enough that she doesn’t mind slaughtering a few people on her path to the Iron Throne. Jon would make for a noble choice in this case but his goody-good attitude means he could never navigate the politics of ruling. He’d certainly be a good Kingsguard though.

It’s a combination of a mixed first act, a somewhat elevated second act accompanied by writing contrivances, followed by a semi-brilliant third act that David Nutter brings together seamlessly in his last episode for the series, to deliver something that, despite a less that stellar start, lingers on with you long after you’re done watching the episode. And in the process, Nutter also extracts some fine performances from his cast, with special mention to Emilia Clarke, who displays just a borerline tinge of the infamous streak of madness that made the Targaryens such a force to be feared and eventually overthrown. She almost teeters on the verge of collapse, dancing around with the notion of a ruler unhinged, sure to land her the title of the Mad Queen before she sets King’s Landing ablaze by ordering Drogon to go Dracarys.

We’re down to the final two episodes now and we can all fairly predict their structure to some extend. Another elongated battle should follow at King’s Landing supplemented by Miguel Sapochnik’s direction, followed by a confrontation-heavy final episode, written and directed by showrunners David Benioff and D. B. Weiss. Those should be great to watch in 1080p, Episode 5 in 4K even. This one, though a fine episode on its own merits, will do at 720p.