Game of Thrones concludes with a bittersweet, divisive ending that would’ve landed a lot better with more episodes to build toward it. 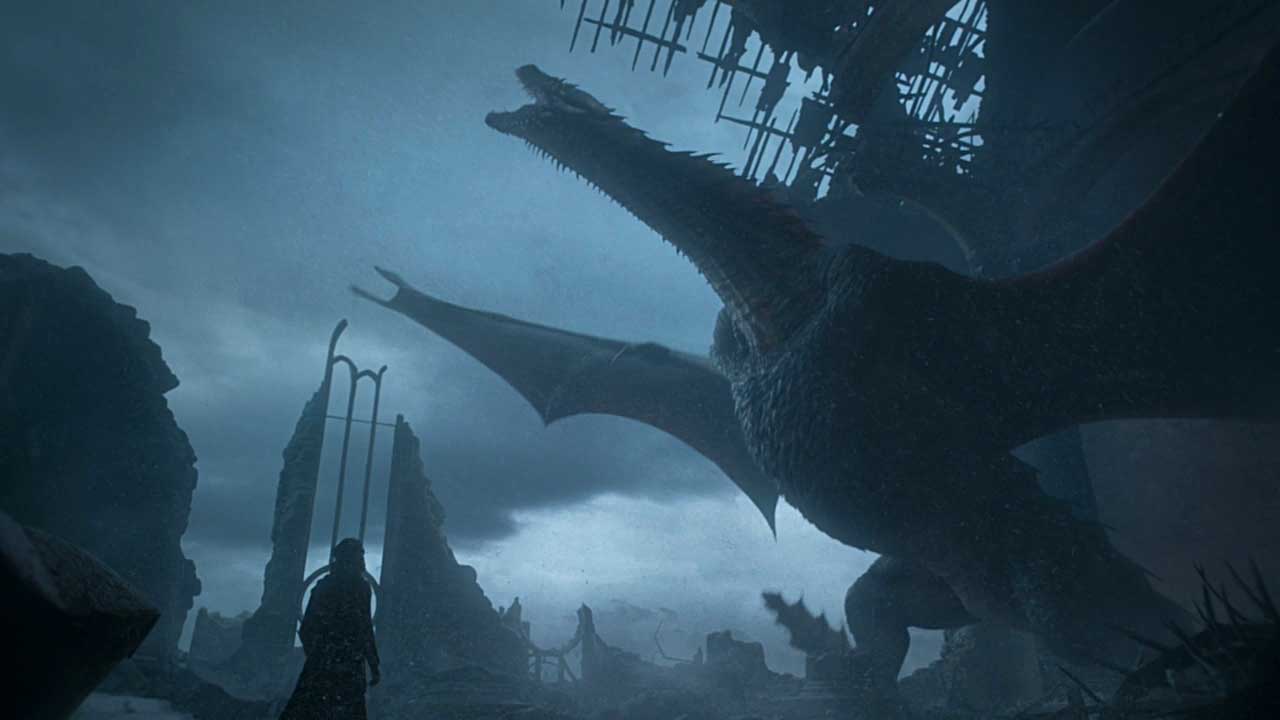 It’s over. After 8 years of leading us through the kingdoms of Westeros and Essos, Game of Thrones finishes off with a bittersweet ending. Certain loose ends are tied up even as many others are left dangling without a satisfying payoff. And even though the finale comes full circle, calling back on plenty of moments from the early seasons (as early as the show’s opening sequence in fact), the frentic, awkward pacing journeying toward that outcome results in a fumbling landing that doesn’t quite stick as well as it whould have, given how poetic and unexpected the ending really is.

After Daenerys snapped and went full Mad Queen last episode, her former supporters question their allegiances toward her. Whether its Tyrion, her Hand or Jon, her Heart, deep down they all know Dany has burned the lines between good and evil and in her quest for ridding the world of tyrants, has actually become one herself. A heartbreaking Tyrion discovers his dead siblings buried within the debris of the Red Keep and relinquishes his badge; he’s tried tirelessly to help Daenerys ascend to the throne all while assuring the safety of others but now that he’s lost the only blood family he had and the last of the living Lannisters, there’s only so much fealty he can swear. Taken in as prisoner, he tries to talk Jon Snow into thwarting the Targaryen Queen’s attempts, even as all the former Lord Commander of the Night’s Watch has to say is variations of “Daenerys is my Queen”.

Contrary to how fast-paced the last two seasons have been, the conversation between Tyrion and Jon takes its own luxurious time to play out. What’s baffling though is that very little of substance is spoken and we instead meander around empty stares and nostalgic cash-ins invoked by the characters addressing their own legacy; the rich, textured dialogue in Game of Thrones having been long debilitate. I’m actually all for longer episodes and slower tempo but it seems like an odd choice to have a thin, uneventful conversation between Tyrion and Jon stretch out among the countless other important arcs, subplots and characters that could’ve easily done with more time.

Understandably though, the long conversation was essential to build-up toward the first of many bullet checkpoints from Martin’s ending, where Jon takes down Daenerys in a tender moment when the Mother of Dragons refuses to see peace as the path forward. She’s been looking forward to this moment since the first episode and it was even foreshadowed explicitly in the Season 2 finale (settling the snow vs ash debate) and now she is finally able to feel the Iron Throne, never mind the Keep is in a dilapidated state. She becomes consumed by that power, albeit fairly quickly and it only seemed rational for her to fall after she drenched King’s Landing with the ashes of her victims. And yet, despite the effectiveness of her fate, it’s unfulfilling to see the Targaryen Queen who’s been on such a long journey get wiped out so quickly. There isn’t enough time devoted to mourn her loss, or see the resulting aftermath her death would cause. Given the inspiring speech she just gave the Unsullied and the Dothraki (man, these folks never die) about taking over the world and freeing it from tyrants (and that was a great delivery by Emilia Clarke), you’d imagine there would be some fallout, riots, pillaging and plundering leading to chaos amongst the ranks of her soldiers now left stranded without a leader. But we’re not privy to the fallout, and if at all there was any, it’s all dealt off screen as we jump forward a few weeks (months?) to see how the landscape looks.

We do however see Drogon’s reaction to her death and that’s one of the better directed moments of the episode. Drogon doesn’t speak, nor does he charge at Jon who happens to be a Targaryen himself. He lashes toward the Iron Throne and melts it down, as if realizing that it’s the quest for this chair of Valyrian Steel swords that led his mother to her untimely death. It’s a poignant scene and the visual effects team along with cinematographer Jonathan Freeman (taking over from Fabian Wagner) deliver astounding shots involving Drogon. Whether it’s the image of Daenerys with Drogon’s wings, Drogon breathing fire at the Iron Throne or the many visual cues that it uses to finish off in style, there’s a wealth of artistic shots to choose from in the scene in particular, and the episode in general, making my choice of thumbnail infinitely more difficult. Every other frame resembles a medieval painting that would sit fittingly and with pride in the art galleries of Westeros. We’re going to need some official images in 1080p or 4K to use as wallpapers once the hype has settled.

Moving forward, Dany’s death leaves nobody at the Iron Throne, not even the Throne itself. In a scene set on the Dragonpit, we see the return of every major principal cast member, including Yara Greyjoy, Edmure Tully and Robin Arryn of the Vale (never thought I’d see him) as they debate on their choice of King. Again, as foreshadowed in prior seasons, they eventually settle on electing rulers as opposed to having rulers be born in houses, with Bran Stark becoming the first choice. As silly as it sounds for Bran to be sitting on the Iron Throne, its actually symbolic in that as opposed to sheer brute force and raw power, it’s ultimately knowledge that’s victorious. Westeros has had noble, strong and egocentric kings for a long while and they’ve all eventually either led everyone to wars or inspired rebellions, it might as well do with a king who has access to the entire history and can avoid the follies of the past. It’s sold well enough by Benioff and Weiss on screen which is why it appears a lot more convincing and reasonable than it sounds reading it on paper (where it appears ridiculous).

There are plenty of callbacks to prior Seasons and they’re a mix of some important moments coupled with insignificant ones. It’s a little exhausting how much Benioff and Weiss rely on referring to plot developments in the Seasons gone by to drive conversations when earlier seasons had characters chat about history, stories and metaphors. It’s probably why the exchanges at the King’s Council feel so shallow in comparison; also, it looks like quite a lot of time has passed seeing as the city an the Red Keep have been both repaired to their normal state. What is interesting though is to see the Starks close out the episode; by the end, the Starks occupy all the prominent places and positions in Westeros and beyond. Bran sits on the throne, decked in a regal outfit that’s reminiscent of prior kings. Sansa getting crowned Queen in the North is again a fitting conclusion for her character, even as it may not have been a seamless one. Arya sailing to explore “What’s West of Westeros” has echoes of her journey to Pentos at the end of Season 4 for a future that changed her completely, and is bound to spark discussions about a potential spin-offs. And Jon is exiled to the Night’s Watch as pardon for slaying the Queen as he marches with the Wildlings north of the Wall in sequences that are a direct callback to the show’s very first shots where two of the Watch’s members marched past the Wall and encountered White Walkers. Also great to see is Ghost finally getting a moment with Jon after a cold goodbye between the two in Episode 4 left fans angry.

What is equally frustrating is the lost potential of several story arcs that make you feel there should’ve been more to them. Mind you, these are not stock subplots like Daario Nahaaris left behind to rule in Meereen (wouldn’t hurt to see him though). Unarguably, the biggest is the discovery and revelation of Jon’s parentage that bookened Seasons 6 and 7; that remarkable secret only helps Jon escape Drogon’s wrath after slaying Dany. His Targaryen heritage did pose a threat to Daenerys over her claim to the Iron Throne, but even the ramifications of this development introduced at this very season’s beginning are cast aside, leading Jon ending the show as more of a Stark than a Targ. Bran’s all-seeing purpose as the Three-Eyed Raven is used to get to this critical revelation but because that knowledge itself isn’t well used, Bran feels partly wasted as well. As do all the people who died or left protecting him in his journey Beyond the Wall, including Jojen & Meera Reed and least of all Hodor. Bran’s warging abilities were reduced to a mere plot point rather than playing any pioneering role in the saga of the Seven Kingdoms. The Greyjoys, Dorne and everyone else were reduced to mere props and while its understandable that Benioff and Weiss needed to focus on its principal cast in the episode’s final moments, all this could’ve been avoided by having more episodes to finish off in the first place. Hell even a single episode more would’ve given the show enough time to address at least some of those unfinished subplots.

This isn’t to take anything away from the cast and crew though. They all delivered and gave us a show, the likes of which never has nor will be seen in quite a while. If anything, the success of Game of Thrones should open the world of Television up to more such stories, and we’re already beginning to see some efforts in that direction. And as incompetent as the writing has been, I’d wager that the episode was directed deftly by the same writers and maintained its quality and production values through the very end. This inconsistency and abrupt shift in the show’s storytelling made it extremely difficult to assign a single number to rate episodes and makes the final episode that much more difficult to quantify. For the meanwhile then, I’m going to refrain from rating this episode explicitly.

In the end, Game of Thrones has been a wild ride to follow. There have been ups and downs, betrayals and setbacks, wars and emotions, twists and reveals coupled with lots of excitement, fear, agonizing, scale and gore. Game of Thrones has delivered a spectacular TV experience that kept us occupied, guessing and theorizing for the better part of a decade. It’s been a memorable journey all along and despite the stumbles along the way to its conclusion, it most certainly feels like the ending George R. R. Martin had for the Song of Ice and Fire saga all along. It’s going to be interesting to see how Martin himself leads us to this ending, if at all he does.

In the meanwhile, thank you to HBO and the cast and crew of Game of Thrones for delivering the ending we never thought we’d get.