What The Jurassic World: Fallen Kingdom Post-Credits Scene Means For The Franchise

We examine the implications of the ending and the post-credits scene of the recently released Jurassic World: Fallen Kingdom

We examine the implications of the ending and the post-credits scene of the recently released Jurassic World: Fallen Kingdom

Jurassic World: Fallen Kingdom opened in North America today to mostly tepid reviews and a box-office estimate that we’ll be privy to soon. We had reported previously that the movie has two post-credits scene. However, having seen the movie in its entirety now, I can confirm there’s only one after-credits scene that literally shows up once the credits have rolled. Having said that, the scene even though small, is a big one in terms of its implications for the franchise going forward.

We’re going to be delving a bit into that scene and also discuss the ending of Fallen Kingdom to speculate on the direction that Jurassic World 3 could be heading towards when it releases 3 years from now. Needless to say, the post contains heavy spoilers for Jurassic World: Fallen Kingdom so those who haven’t seen the movie, turn back.

At the end of Fallen Kingdom, the main characters are trapped in Lockwood Manor with a bunch of dinos rescued from Isla Nublar. The dinos are being threatened by asphyxiation due to the ensuing chaos and run the risk of dying in the confined space, until they’re set free by one of the main characters. The dinosaurs run out into the wild, unrestricted. The post-credits scene shows a group of Pteranodons assembling on top of the Eiffel Tower in Paris.

The implications of this scene are huge for Jurassic World as a franchise. Right off the bat, it indicates dinosaurs are now loose in the city. It’s in essence, a Lost World kind of scenario except that instead of one T-Rex wreaking havoc, we now have an entire group of them out there in the wild. A lot of the dinosaurs out there are herbivores so they shouldn’t pose as much of a threat, yet the stamp of a Brontosaurus could spell doom for dozens of citizens, intentional or not. 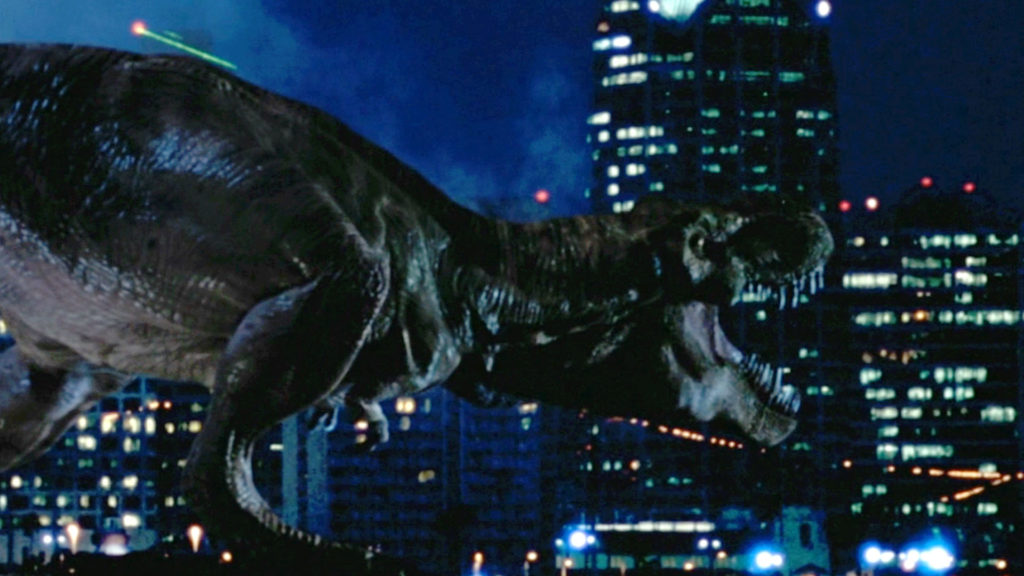 These ramifications become even interesting once you add in the possibility of dinosaurs breeding. With that, you’re likely to get a whole army of dinos ready by the time Owen Grady (Chris Pratt) and Claire Dearing (Bryce Dallas Howard) face them in the sequel to Fallen Kingdom. The result could be a massive worldwide hunt for all dinosaurs out there to capture them, a quest that could very well draw out Jeff Goldblum’s Ian Malcolm as well as his comrades Alan Grant (Sam Neil) and Ellie Satler (Laura Dern) out of hibernation. The movie’s tone could also undergo a radical shift and I find it hard to believe director Colin Trevorrow’s claims of a more science-fiction oriented movie when the stage has clearly been set for a Fast & Furious cross Indiana Jones styled action adventure.

But let’s take this further down the road. Universal Studios clearly wants to continue the franchise for as long as possible. What if then, instead of wrapping things up with the third movie, it ends on a gloomy scenario where the dinosaurs win and rule supreme? What if the filmmakers go the Planet of the Apes route in depicting a post-apocalyptic world and we get a Planet of the Dinosaurs instead? This would effectively take us back 65 million years ago when dinosaurs ruled supreme only this time with humans as their prisoners, unable of being able to do anything to rebel against their newfound masters. And we’ve already seen these creatures getting smarter thanks to genetic meddling. It’s entirely within the realm of possibility then that they get smart enough to rule and outwit humans, to see through their schemes and imprison them for food and meat. The T-Rex could be a parallel to Ceaser, understanding of the plight of the humans but siding with his fellow monsters nonetheless. The series would then truly be worthy of its name Jurassic World.

I find it reasonable to assume this could be at least one of the directions being considered for the franchise going forward. The third movie would essentially serve as a War for the Planet of the Apes for this trilogy, ending with cities in ruins and humanity mostly overruled by dinosaurs, save for a select few who find themselves in the captivity of their new gods. This in turn could kick off a fresh trilogy where the entirety of Earth is one giant massive Jurassic Park. For now though, expect the third movie to be a wild goose chase for hunting dinos throughout the urban jungles. In fact, I have a potential title right there: Jurassic World: Urban Jungle.

What do you think about these thoughts? Do you think these speculations make sense? Could this be the direction they’re headed into? Let me know your thoughts in the comments below.

First Two Clips From Ant-Man And The Wasp Released