Game of Thronesmindhunterstranger things
By Divij Sonak On Dec 21, 2017 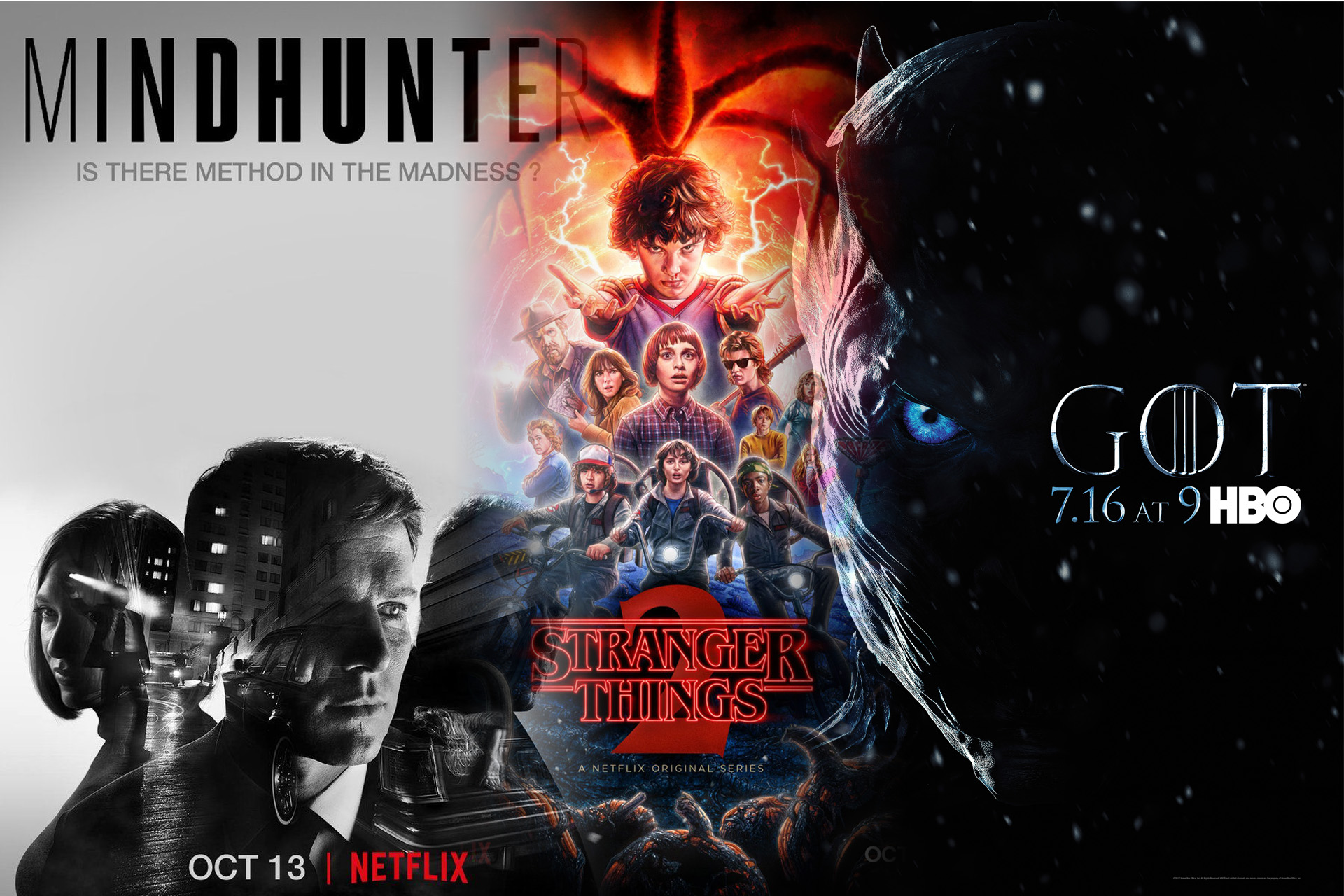 Google last week compiled a list of Trending searches for the year 2017 which included searches across all categories as well as searches for a few specific categories with the results available country-wise or at a global level. We already covered the search rankings for Movies in a prior article with TV Shows being the focus of this one.

Let’s start with the bottom this time. At No. 10, we have Netflix’s Mindhunter helmed by acclaimed filmmaker David Fincher. Adapted from a book of the same name and set in the 70s, the show gripped viewers with its drama-focused dialogue-heavy narrative centered around the quest of two FBI agents to understand how serial killers and other psychopaths think. Immediately above it is India’s The Kapil Sharma Show well known for the laughs provided by the show’s chief host of the same name although it also received some negative spotlight for all the drama that unfolded between the show’s host Kapil and co-host Sunil Grover this year. The next three entries on top are the well-received book adaptation American Gods, Archie Comics based Riverdale and Indian reality show Bigg Boss which received some flak for its potentially scripted nature.

In another surprising twist, at fifth place stands Marvel’s Iron Fist. Yes not the much-hyped and better received The Defenders which was not only a follow-up to the show but also featured all heroes from Marvel’s Netflix shows up to that point together and not even The Punisher which rode a wave of good criticism and acclaim for Jon Bernthal’s performance but instead Iron Fist which was poorly received and criticized for its thin writing, weak characters and disappointingly inept fight sequences. Supposedly all the negative buzz seems to have helped the show gain momentum in searches. Up next is Big Brother Brasil, a reality-show similar to (and also serving as the inspiration for) the Indian Bigg Boss. 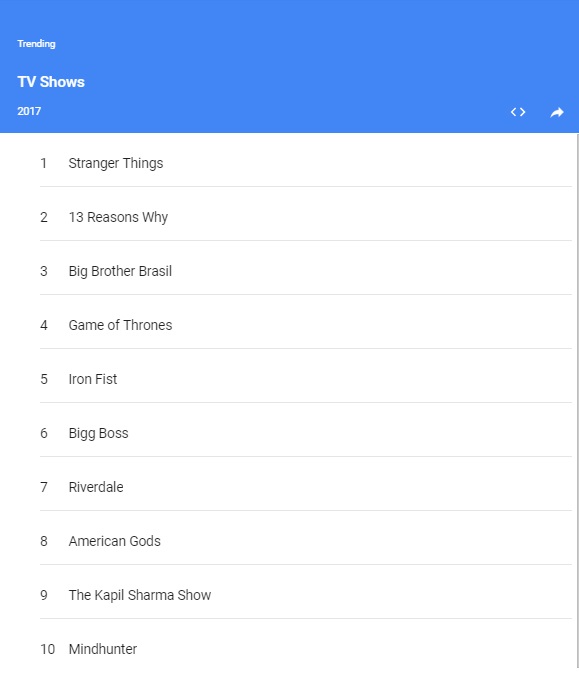 Rounding up the Top 3, we have Game of Thrones in third place helped by a much anticipated Season 7 which, while enthralling viewers, also ended up with a somewhat polarized reception with criticism directed towards its incessant use of time-hopping contributing to what people perceived as plot holes. At second is Netflix’s yet another acclaimed drama 13 Reasons Why revolving around a teenager writing letters to people who she claims were responsible for her suicide in some way. Finally leading the pack is Stranger Things, which has been one of Netflix’s major draws for a long time now and saw a second season release this year to great reviews.

As with movies, TV Shows follow the trend of seeing a huge spike in interest around the time of their release with the search volume dying down gradually thereafter. This undoubtedly means Stranger Things saw huge interest during the tail end of Oct and the beginning of Nov whereas Iron Fist saw heavy search interest during the middle of Mar. The relatively narrow window of interest of these shows is explained by Netflix’s method of releasing all episodes of a show on a single day to encourage binge watching. Traditionally broadcast TV Shows such as Game of Thrones and American Gods saw a sustained interest for several weeks during which the shows were on air.

It’s also interesting to note the amount of influence Netflix has had on Television in the last few years. The fact that 4 out of the Top 10 entries is proof enough of its proliferation among daily television viewers. No wonder then that Disney is planning to enter the streaming business to give Netflix a run for its money.

You can check out the details for yourself in the source link below. Be sure to also check out our thoughts on Google’s rankings for Movies and Technology.

Wonder Woman, Dunkirk and Baahubali among top movies searched in 2017 according to Google