Here’s a run down of what was shown in the leaked trailer. 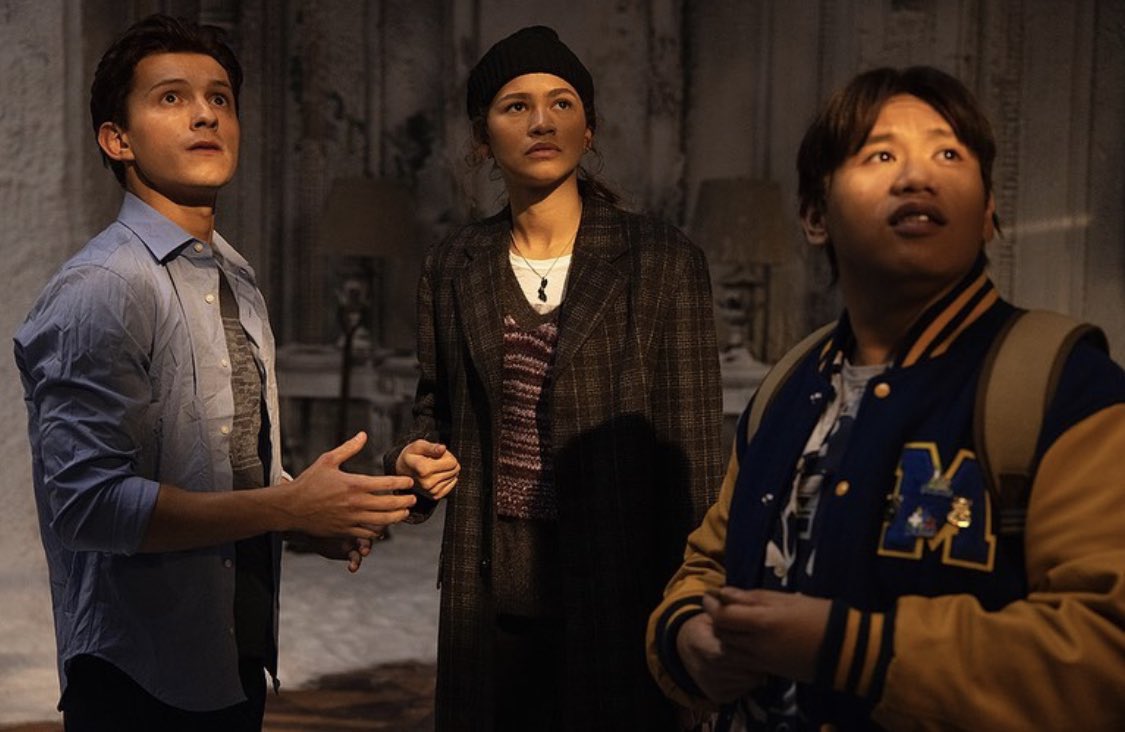 The Spider-Man: No Way Home trailer leaked online today and if you are even remotely interested in the MCU, you would’ve gotten an inkling of it. With some effort, you can even find the trailer online as Sony and Marvel scramble to scrape the footage off the internet. There’s more, including our first looks at Doc Ock, Electro and Norman Osborn as well as a leaked set photo of Tobey Maguire and Andrew Garfield on the sets of the movie. It’s inevitable that with all the frenzy around and the leaks refusing to stop pouring in, the studios will release the official trailer at some point in response. It’s only a question of when or in how many hours.

That said, I thought it’d be fun just to try and attempt some sort of description and breakdown of the trailer that leaked. For those hoping this post will contain links to the actual trailer itself, nope, it won’t. I don’t want to risk a takedown with my small site coming to Marvel’s attention so if you’re hoping I’ll link to the trailer at the end of this post and that’s all you care about, by all means, turn back.

If, however, you’re someone who just woke up to this online frenzy and doesn’t want to watch the heavily pixelated, barely audible trailer but is still interested in getting some rundown of just what was shown in the hopes of getting excited without having to see any footage, you’re at the right place. As I mentioned though, the trailer is difficult to grasp because it’s a recording of a recording of a trailer playing on a screen with some teenage chatter thrown around occasionally. I’ll do my best to paint a picture of what was shown as faithfully as possible.

The trailer begins by Zendaya’s MJ and Tom Holland’s Peter Parker lying down outside, presumably near the college campus. MJ reads some news about the Stark Tower and talks about someone hypnotizing females which Parker brushes off. Parker wishes to MJ if they could stay there all day as it’s so crazy down there. We then cut to Spider-Man swinging with MJ along the streets of New York in one of the many unfinished shots from the trailer as J. Jonah Jameson screams over (seemingly) the Times Square monitors, stressing that Spider-Man is in fact Peter Parker.

Parker is then interrogated by the FBI. It appears he has been apprehended for killing Mysterio. Peter maintains he didn’t do it and that Mysterio was killed by his own drones. The officer reminds Parker that those were his drones. Cut to a few shots with Parker, MJ and Ned walking in slow-motion as everyone around gives them suspicious stares.

MJ questions whether Parker needs to lie now that everyone knows his identity. Parker emphasizes that he never wanted to lie to MJ (or Aunt May) but fails to understand how could he simply walk over and reveal that he’s Spider-Man. Parker once again emphasizes that now everyone knows and this isn’t about just him but it’s a lot of people. He wants to figure out a way to fix all this.

We cut to the Marvel Studios and Sony Pictures logo and see the Sanctum Sanctorum as Benedict Cumberbatch’s Doctor Strange enters the scene. A funny exchange takes place between the two with Strange asking Parker to stop addressing him as Sir, to which matters get a bit weird. Here’s the exchange:

Strange: To what to I owe the pleasure.

Strange: <dramatic pause> That was weird but I’ll allow it.

Parker then explains how Mysterio revealed his identity, leading to a lot of issues and asks whether he could make it so that this never happened. It appears there’s a spell Strange can cast to ensure just that but Wong enters the scene and warns him.

I can’t really tell but Strange gives Parker a long stare. He might have winked at Parker.

Both Strange and Parker then enter the chambers where Strange begins the spell. He murmurs that this will lead to everyone forgetting that Parker is Spider-Man.

Parker becomes a bit worried and steps in within the range of the spell, questioning whether truly “everyone” will forget his identity. He then asks worriedly whether it’s possible to have some folks remember his secret identity, such as MJ and maybe his best friend Ned. Strange retorts, “That’s not how the spell works”. Strange repeatedly asks him to “stop jabbering with the spell” and “stop talking” before ultimately casting the spell. These here, are major clues as to why things end up going horribly wrong.

We then cut to a montage of sequences of Spider-Man leaping across unfinished VFX as Strange explains what the spell has done, cutting through space-time and opening the doorway to the Multiverse (the exact dialogue is again hard to decipher). We also see Strange and Parker atop a moving train in another unfinished shot. Strange talks about Parker living two different lives as a result of the spell and the longer he does it, the more dangerous he becomes.

Some notable shots include:

Some lightning strikes, which could be fired up by Electro.

Finally, we head to the climactic shot set on a freeway where traffic has come to a standstlil. A pumpkin bomb drops and explodes beside a trailer truck – yep the same Goblin bombs from Sam Raimi’s Spider-Man movies. An ominious voice is heard as Parker in a suit stares back towards the explosion, MJ seated in a car:

“Be careful what you wish for Parker”

A figure emerges from the smoke, a tentacle smashes on the surface. And Alfred Molina’s Doc Ock emerges, looking exactly as he was in Spider-Man 2, grinning viciously and remarks, “Hello Peter”. Spider-Man crouches, ready to fight. The title shows up.

I think the trailer does a good job of giving away the general storyline. Strange casts a spell that gets messed up, resulting in realities colliding. The question is, whether Parker interfering with the spell by uttering words in between leads to the mess up or was it doomed from the start.

I also have many questions, chief amongst which being why on earth would Strange agree to cast a spell and behave so recklessly, even after the cataclysmic events of Infinity War? And even if he does, how does Norman Osborn return How does Peter Parker’s identity being revealed become such a big deal – after all, everyone knows who Iron Man, Captain America and even Doctor Strange are.

The trailer also basically confirms one thing: if Doc Ock and Electro could return from the other realities, then it’s certainly possible for Tobey Maguire and Andrew Garfield to drop in as well. I had some doubts earlier that maybe Marvel would pull off a WandaVision and a Ralph Boner but this sounds like they’re legit doing the Multiverse thing for sure, after they pulled a fast one on us during Far From Home.

If you made it this far, let me know which parts of the trailer have you excited. I’ll keep updating this piece as I get more clarity about some of the dialogue said in the trailer.