Suits explores the challenges of Darvey as the firm deals with the fallout of Season 8’s finale. 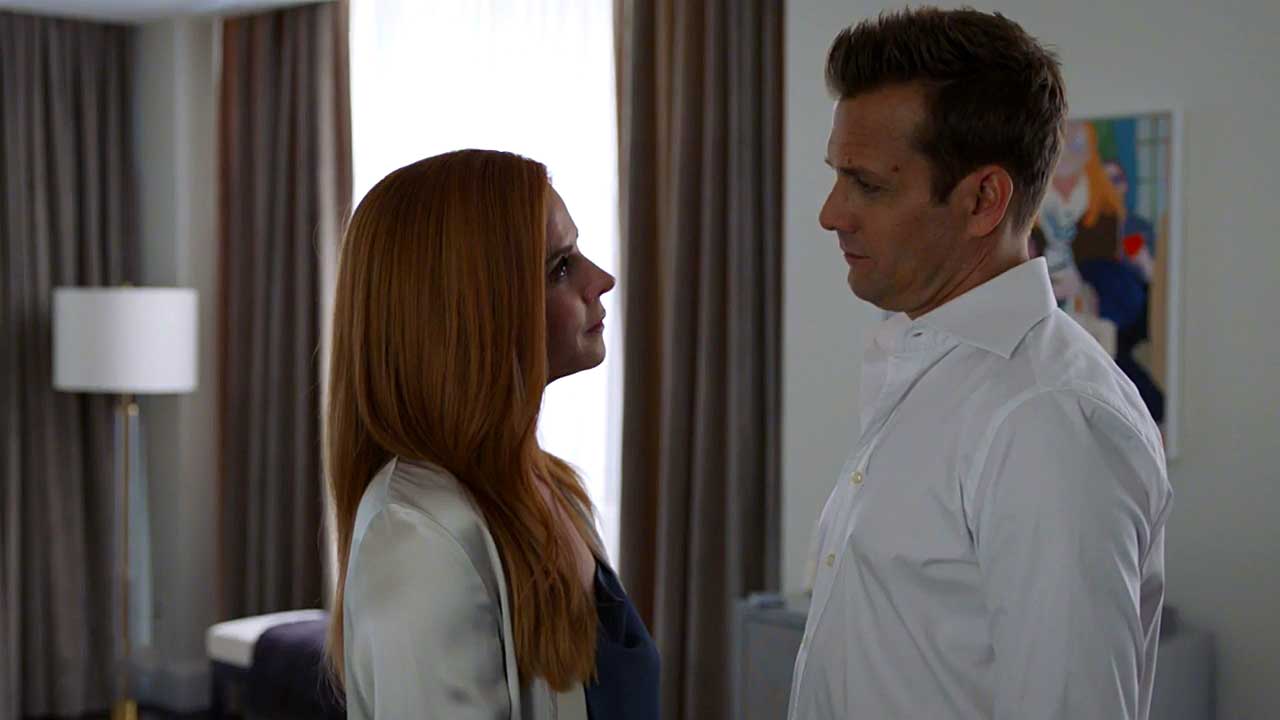 Harvey Specter is back. Suits returns with its final season as its characters deal with the fallout of the events of the Season 8 finale. All the same, the premiere also explores what it means for Donna and Harvey to be in a relationship of sorts and how that plays into the firm’s interpersonal dynamics. And all of this, teasing Patrick J. Adams’ return as Mike Ross, and potentially Meghan Markle as Rachel Zane-Ross in the final season, something that’s been confirmed by the show’s creators themselves.

Showrunner Aaron Korsh himself takes the pen writing the final season premiere. Despite Wendell Pierce not returning, it’s good to see his presence felt through the episode as we pick up the pieces of last season’s explosive finale. Robert Zane essentially threw himself under the bus to save Harvey Specter’s reputation, getting himself disbarred and his license to practice law revoked. The firm of course refuses to drop his name from its title, for which they’re facing a lot of flak and casualties. Whether it’s clients dropping out, or the New York bar threatening to take over and put its operations in jeopardy, everything is tied to Robert taking the blame for Harvey’s (or rather, Donna’s) actions.

To be honest, the firm could do with a name drop. As it is, Zane Specter Litt Wheeler Williams is quite a mouthful and this is a firm that’s changed names multiple times (remember the Pearson Hardman days?). Of course it’s easy to convince Alex Williams and even Louis Litt to some extent but Samantha is certainly not letting this go, knowing what Zane did had something to do with her as well, as also the mentor-mentee relationship they share. Katherine Heigl sells you on that dynamic nicely and even though she arrived fairly late into the game, her strong screen presence ensures you feel she’s been there all along.

In all of this, we have Harvey and Donna trying to keep their finale hookup a secret. Yes, #Darvey is officially a thing now and anyone who’s been following the show right since its beginnings knew this union was inevitable. For one, I’m glad them rekindling their scene together in the finale wasn’t a cop-out and the showrunners are intent on following through with it. But a romance with co-workers is always a tricky thing and not everyone is a Mike Ross or Rachel Zane to pull it off; remember how badly things went for Katrina and Brian last year, although that did have other reasons as well. Regardless, Darvey try to keep it as close to their chests and a hilarious opening scene sees Louis Litt, the firm’s top named partner, absolutely fail to figure out what’s going on.

That said, Samantha is no Louis and she lashes out when she gets wind that Harvey was sleeping with the girl indirectly responsible for Zane’s ouster at the very night of his ouster. Samantha and Harvey make for a rather oddly stronger couple at this point than Harvey and Donna and I’m wondering if the show is setting us up for a corporate love-triangle. It’s a lot more fun seeing Samantha and Harvey butt heads as rivals, the boxing match was a neat bit of the two exercising their common interests, as badly filmed and cringeworthy a moment as it was. As Harvey admits, the two have a lot more in common than they’d like to admit and given Samantha’s strong-headed personality, I find it hard to accept she’d ever fall for Harvey, or even someone else.

For once, Suits brought the focus back to workplace struggles compared to Season 8’s heavy focus on the personal lives of characters. Not that it isn’t fun, I’m sure with Season 9 being the last one, there’s going to be a fair bit of focus on wrapping up the personal arcs of everyone involved as well. It’s going to be interesting to see how far Suits stretches this Robert Zane situation and with that climactic ending, it almost looks like all of the firm’s members have gotten reason to unite against a potential antagonist. This could probably be the only way to finish on a high; everyone including former players returning and uniting to save the firm’s name, then possibly either becoming managing partners or calling it quits. At least Harvey and Donna could retire to the beaches and have the younger lot take over.

Despite the prolonged focus on Robert Zane’s sacrifice, other subplots didn’t receive as much attention. For instance, the relationship between Donna and Thomas winded up through just a phone call and it’s almost as if with Harvey back in Donna’s life, the services of Thomas Kessler were no longer required. Likewise, there was a strangely stiff interaction between Sheila and Katrina that for some reason, felt out of place; was Sheila envious of Katrina’s beauty or was she merely berating her because of her pregnancy mood swings? I’m also not quite sure what purpose it served; might have to see if I can lay my hands and rewatch it (comments explaining the same are more than welcome).

And yes, Harvey has been paying rent secretly for Mike’s apartment that remains unoccupied and unsold. That should certainly assuage fans of his confirmed return and it’s going to be exciting seeing Mike and Harvey back to kicking some butt, like the good ole’ days. Stephen Macht also returns as Henry Gerard and it’s good seeing Harvey Specter’s real life father back in the mix. All in all, Suits delivered a fun premiere that was consistent with its quality in the past few years. The highs of Season 1 may be long gone but Suits continues to maintain form and head toward what’s increasingly looking like a smooth finish.