The veteran director is in Mumbai, India for the week to film scenes for his upcoming “event film”. 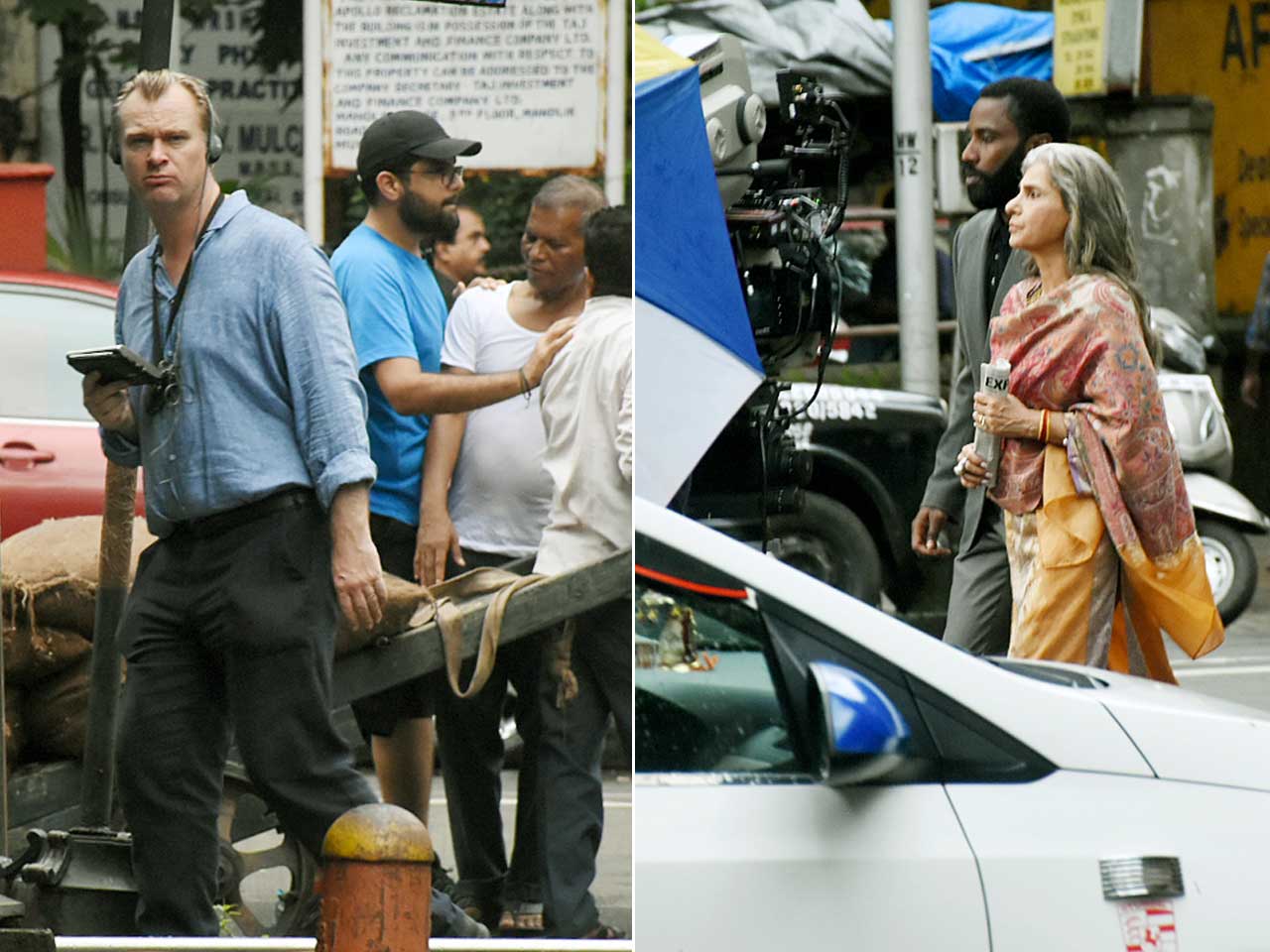 Christopher Nolan appears to have settled in fairly quickly in India and is seemingly sprinting through his shooting schedule. The director shot extensively around the Gateway of India and Colaba Market in South Bombay yesterday in what was the crew’s first day of principal photography in India. Today was Day 2 of shooting and I was able to reach the location and watch the shoot in person in the company of like-minded Nolan fans.

First off, with regards to the restaurant set that they had erected for the film facing the iconic Gateway of India, it looks like Nolan is done filming his scenes for that set. The small, tram-like place, named Chaand restaurant stood there for most of yesterday but today we saw the crew taking out all the props within until it was left standing empty. I was able to snag a few pictures before they probably took down the set for good.

Today’s shoot took place near the Colaba Causeway area. It was difficult to locate at first but then barricades and crew cards sporting the movie’s working title Merry-Go-Round gave it away. There were conflicting reports as to what was being filmed; some reports claimed it was a chase scene, although that appears to have been shot yesterday. Instead, today’s shoot involved a dialogue scene between John David Washington and Dimple Kapadia, the kind that tends to excite a lot more with Nolan.

It took quite some prep for the shoot to begin, the crew laying down tracks for the camera to move steadily over a dolly track. Nolan blocked the shot through the IMAX camera himself (Panavision crews were present as well), before Hoyte Van Hoytema took over cinematography duties. The scene then involved Washington and Kapadia conversing with Nolan walking ahead, listening to their conversation and guiding them on retakes. It was difficult to hear, or even guess what was being said.

I will say though that the scene had strong vibes of sequences from Nolan’s Inception between Leonardo DiCaprio’s Cobb and Ellen Page’s Ariadne when Cobb explains her the rules of the dream world. There’s a specific shot in particular where Ariadne builds an arched pathway by breaking mirrors on both sides; that arched pathway look is what they were going for with the location. This should further fuel those fan theories that suggest Tenet is basically set in Nolan’s Inception-verse.

After multiple takes and retakes (they must have shot the scene over 10 times), they crew apparently headed to Breach Candy to shoot more scenes. By this point, I was exhausted and headed back to work, but as a feeling, it was something else entirely watching Nolan work his magic for those few minutes that we got to see clear glimpses of him. Photography was strictly prohibited and after a point, a crew member just stood with an umbrella behind his back to block the view. The few shots I did manage to get were, as you can see, far from special. But thanks to those few moments that all us Nolan fans got to see him direct, we returned home happily content.

The crew is now expected to shoot somewhere around Grant Road in the remaining three days. It is also being reported that the Mumbai-leg of the shoot could just be this one week, instead of two weeks that was reported earlier, with the crew slated to fly to Ahmedabad for the second week. Also, with most of the outdoor shoots done (again, reportedly), it remains to be seen how much of the cast we get to spot in the days to come. Here are some set photos sourced externally from The Quint.