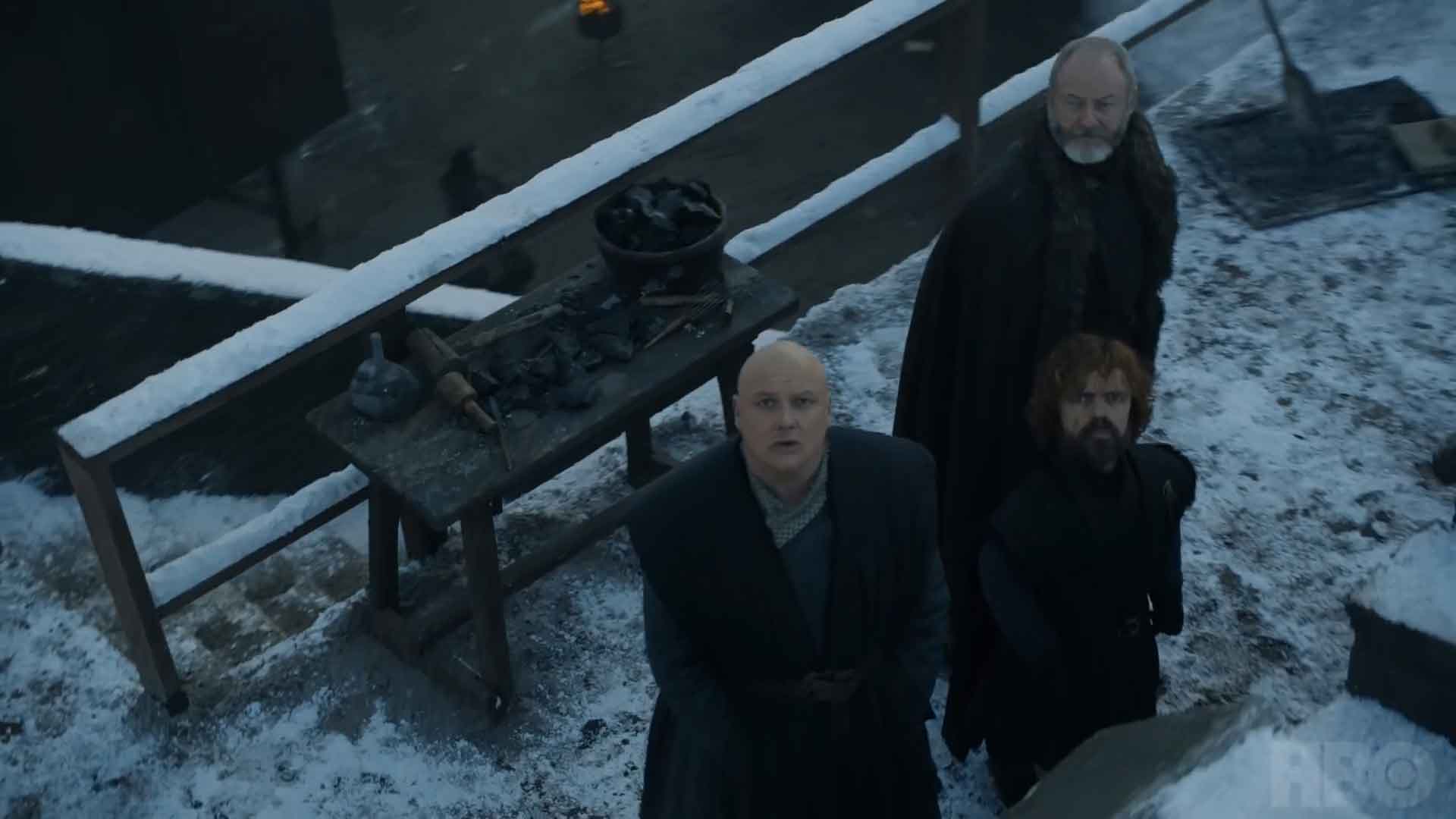 In the last 24 hours, HBO has released three new teaser trailers for Game of Thrones Season 8, with the latest one coming mere minutes ago. The teasers are cut like TV Spots in that they mostly contain footage from the recently released Season 8 trailer (which itself was quite sparse on footage). They all build up ominously to the Battle of Winterfell between the living and the dead as the White Walkers continue their march south, having breached the wall.

The first of these teasers titled Together contains some new footage including Tyrion, Varys and Davos staring at the sky, as well as a couple of new shots of Jon and Daenerys Targaryen as everyone prepares to brace the battle ahead. The second one is similar in tone with a new line from Tyrion Lannister, and the spot in general echoing the theme that loyalties, alliances, and kingdom squabbles no longer matter and should be cast aside for the bigger picture, which is also the spot’s title, Survival. Of course Cersei is oblivious or ignorant to this as she sits in the Red Keep weeping at a loss of something unknown; either that, or those are tears of joy with the Golden Company having come to restore her lost glory.

The third teaser is the most intriguing of them all. Titled Aftermath, it’s meant to convey the deadpan silence that accompanies Winterfell in the aftermath of the Battle with the White Walkers. Among the several artifacts lying around, we see Tyrion Lannister’s Hand of the King badge, Jaime Lannister’s metal arm and Jon’s Valyrian Steel sword, all lying among the ruins and the snow as a mysterious figure walks away or toward the camera (with the intense snow, it’s hard to tell).

From the looks of it, it appears as though the Night King emerges victorious in the battle and continues his march south to take over King’s Landing, which is where the final three episodes should come into play (the battle being episode 3). It also appears that there are some heavy casualties in war, including Tyrion, Jaime, and some others (possibly not Jon, that I refuse to take in). Or at least that’s what the showrunners want us to believe; it’s not hard to imagine this could be a trailer cut specially to convey this false message, much in the veins of the Season 6 Hall of Faces trailer that showed everyone from Tyrion’s to Danerys’s to Sansa’s faces stewn and placed over the House of Black and White, in hopes of convincing us they all die.

Game of Thrones has been rather subdued in its marketing thus far. Sure, there have been the usual stills, magazine covers and trailers released but showrunners David Benioff, D. B. Weiss and HBO are holding their cards close to their chest. I’d be willing to believe that everything we’ve seen thus far is from the first two episodes, with some bits (like the Unsullied suiting up) from the beginning of Miguel Sapochnik directed Episode 3 where the battle takes place. We have the running times and with the season set to premiere soon, it’s only a matter of time before we get the Season 8 episode titles as well. Unless the TV Spots were meant to be the episode titles, which I highly doubt given their names.

Game of Thrones Season 8 premieres on HBO on April 14, 2019. Don’t forget to check out our For The Throne series to recap events of the past.