Salma Hayek lets loose and gets excited about featuring in Marvel’s The Eternals. 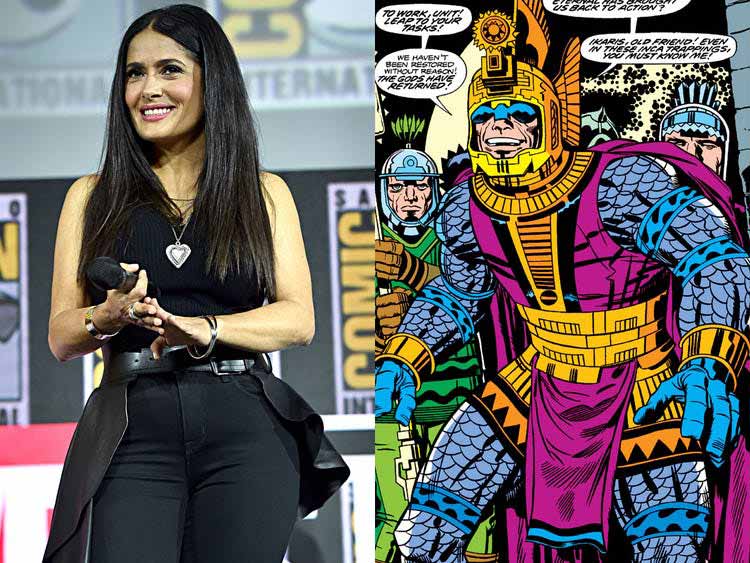 The Eternals is Marvel’s wild card at the moment. With an unusual cast, a peculiar concept and a team unfamiliar to general audiences, The Eternals is nevertheless being anticipated with bated breath. Part of that has to do with its production company Marvel Studios and their impeccable track record of delivering hits and making household names out of such obscure superheroes as Ant-Man and the Guardians of the Galaxy. If anything, the studio is banking upon the project quite a lot.

For Salma Hayek, the excitement of getting to play a superhero this late in her career trumps any potential box-office concerns which she doesn’t get into. She also talks a bit more about her character Ajak, the leader of the Eternals and is all praise for Angelina Jolie who she claims is destined to play a superhero.

At 53 – finally! – I can be a superhero. I play Ajak, who is the leader of the superheroes and all of them are people you would never have imagined. Except for Angelina [Jolie]. Angelina – she was born to be a superhero!

She also talks about the misfit aspect of the Eternals, an oft-used trait of superheroes. Supposedly not even the gods are exempt from being it.

The rest of us [Eternals] are like misfits, and we’re all superheroes, and I get to be the leader. That sounds really appropriate! Yes, why not? Let’s go! It just made me feel like, ‘Maybe they’re doing something different.’ And they are.

Finally, she reveals the aspect that got her excited about the project to begin with. It was the director Chloe Zhao. Hayek is floored by her director, singing all raves about her debut film The Riders. Her early efforts is what landed Zhao the job to begin with.

The director is amazing. Did you see her first movie? The Rider? I was blown away. The one thing that excited me the most was the director. She’s incredible.

The Eternals has wrapped filming although news continues to be scarce in the wake of the coronavirus pandemic. With productions halted and post-production suspended on a majority of features, it looks like the next few weeks might be a dry spell for Movies and TV Shows in general. The movie was also recently delayed to February 12, 2021, taking the place of Shang-Chi And The Legend Of The Ten Rings as part of a massive release date shift underwent by Marvel / Disney.

While there’s still a lot of time, filming has apparently wrapped on The Eternals this February. Hopefully that means a teaser trailer can be readied soon enough.