There’s been so much speculation and anticipation at the arrival of a new trailer for Avengers: Infinity War that it seems even the filmmakers are compelled to give fervent audiences what they’re asking for. Almost every summer blockbuster movie is treated to a minimum of two trailers and for this year’s biggest movie in the Marvel Cinematic Universe yet, the time has arrived for that imminent second trailer to drop. And cryptic tweets, rumors and anonymous sources linked to movie theaters are all suggesting this could arrive as early as Friday itself.

Let’s dig into these sources. First off, and the more recent one is a tweet by the Russo Brothers themselves. For those living under a rock, brothers Anthony and Joe Russo are the directors of the magnum opus that is Infinity War and mere hours ago, they shared this cryptic tweet.

In a time where filmmakers often play coy to dodge questions they do not wish to answer, this is a pretty clear sign that a new trailer is on the way. So what exactly is all the chatter about Friday? And why is the trailer being rumored to drop this week itself?

To answer that we examine the other source, an anonymous one that goes on Reddit by the username skerdypants. Claiming to be connected to a popular movie theater chain, the user is confident of movie tickets for Avengers: Infinity War going on sale on March 16. Second and final trailers for movies generally do indeed drop at the date tickets go on sale to cash in on the craze and pent up excitement, which gives more weight to the theory of the new trailer arriving on Friday. A screenshot of an internal memo circulated within the theater chain is also available and clearly shows the marketing blitz for the movie shifting gears from this Friday. 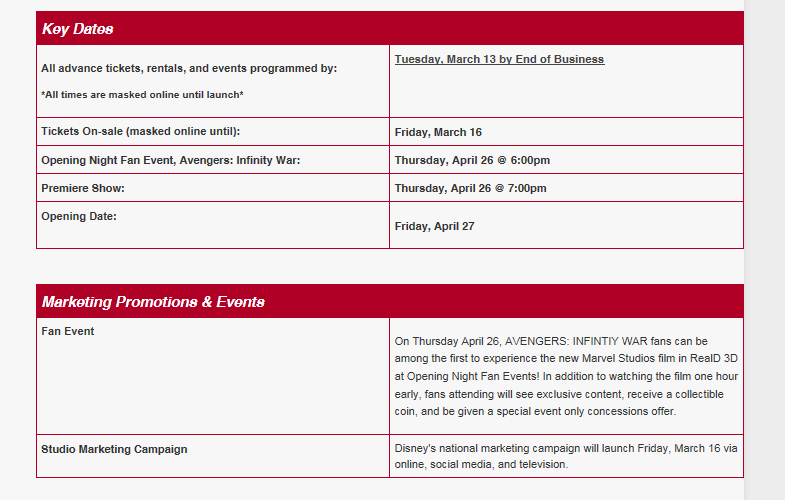 Finally, a new trailer for Infinity War has already been screened at an internal Disney investors meeting which means it’s ready and probably just gaining a few finishing touches here and there with the title cards and all for a worldwide release. Plus, Friday will mark one month since the release of the massively successful Black Panther and considering the teaser for Infinity War dropped less than a month after the release of Thor: Ragnarok, Marvel’s internal embargo could probably have been lifted as well. It only helps that the release date of Infinity War was bumped up by a week.

All these factors strongly suggest a new trailer should arrive tomorrow or, if to the disappointment of us all it does not, it should be on the way online in the next few days. The question is, are you prepared for it? Let us know your thoughts and feel free to share your excitement in the comments below.

The first trailer for Fantastic Beasts: The Crimes of Grindelwald is here