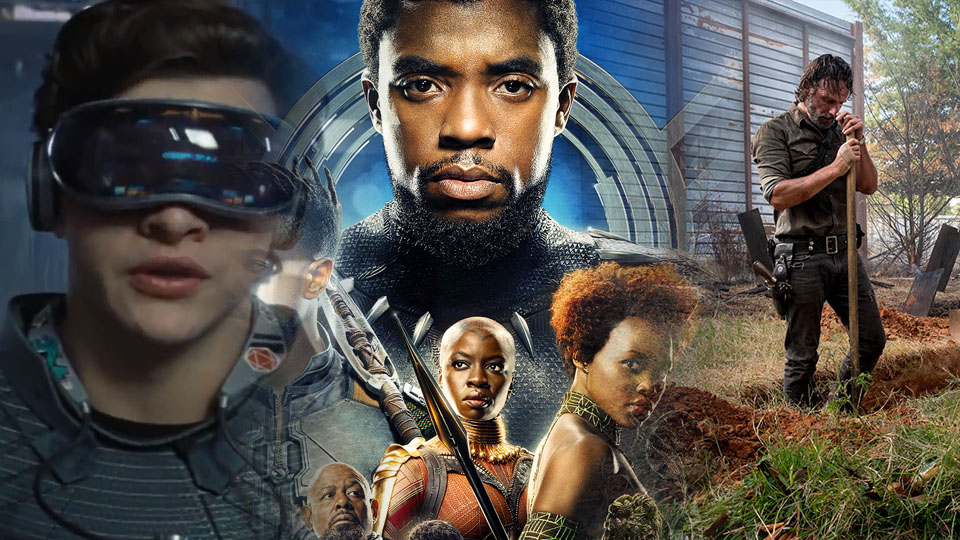 Welcome to another edition of the Appocalypse Monthly Round Up in the field of Entertainment i.e. Movies & TV Shows. I guess we should give ourselves a pat on the back for making it this far. The month of February was dominated primarily by the Super Bowl which saw many trailers hit the web. But that wasn’t the only thing that held everyone’s attention.

Without further ado then, here’s a list of the Top 10 pieces of news that were on everyone’s radar:

After airing its mid-season finale last November, The Walking Dead resumed Season 8 with a heartbreaking mid-season premiere that saw the departure of one of its major characters. Find out all about it and whether or not it helps pull the show out of its slump in our spoiler-filled review here.

Tom Cruise’s movies manage to be in the news for his stunt work with his Mission: Impossible franchise at the forefront. After an arduous shooting schedule, Cruise finally debuted the first look at the upcoming installment directed by Christopher McQuarrie who becomes the only director in the franchise’s history to return for a second movie. The trailer was followed in a few days by a behind the scenes look at one of the action sequences glimpsed in the trailer which sees Cruise riding a helicopter. Check out the links to see both the videos.

With Justice League making its way on to Blu-Ray this month, a couple of deleted scenes featuring Superman made waves over the internet. One of these gave us our first glimpse at the rumored black Superman costume while the other played out a much talked about scene from the trailers. You can check out both at the links above.

Hot on the heels of Justice League related publicity, reports started to emerge that Zack Snyder was let go from the movie as early as the beginning of 2017. This was after a first cut of the movie by Snyder was described as “unwatchable” and executives started panicking about the movie’s fate, leading them to bring Whedon in. Check out the full story here.

Steven Spielberg’s Ready Player One has enjoyed a muted marketing campaign thus far but that began to change drastically this month. We got a brand new 80s themed poster for the movie as well as a third brand new trailer with a much more ominous tone than the previous two. Among other stuff for the movie, Empire Magazine also did a special edition with Spielberg featuring his filmography along with a piece on the upcoming virtual reality movie.

Marvel Studios’s eighteenth film in their Marvel Cinematic Universe released this month to almost unanimous critical and audience appreciation. Black Panther has since then quickly amassed a cult following. After opening to a historic $240 million over the 4-Day President’s Weekend, the movie made $500 million in almost no time and ended up grossing over $700 million worldwide. It’s even being considered as having a shot at challenging the current king of superhero movies, Marvel’s The Avengers. Overwhelmed by the success of the movie, director Ryan Coogler thanked the media and the fans in a publicly released letter on social media.

Super Bowl undoubtedly was the talking point for the first week of Feb and Avengers: Infinity War got a brand new 30-second spot as well. The highlight was the amount of new revelations in the spot which truly conveyed a sense of how well a job the marketing has been doing concealing all the crucial information from us.

The first look at the much maligned Solo: A Star Wars Story was released this month. This included a Super Bowl Spot followed by a full-fledged trailer and a batch of stills. And for the movie’s turbulent production history which saw two of its directors get fired, that footage wasn’t half bad at all but paints the picture of a decent and fun albeit unnecessary movie in the Star Wars lineage.

All the Super Bowl Trailers

Rounding up the Top 10 is a look at all Super Bowl trailers that were released this month. Super Bowl was undeniably the talk of the town for movie buffs for an entirely different set of reasons unrelated to the big game itself. Trailers for Red Sparrow, Jurassic World: Fallen Kingdom and a new Dwayne Johnson starring Skyscraper, all of which and some more are available to view at the link above.

Bonus: The Road to Infinity War

Now this isn’t a news piece per se but in anticipation of Marvel’s upcoming Avengers: Infinity War, we’ve been running an ongoing series leading up to the movie’s release. Titled The Road to Avengers: Infinity War, we intend to recap all the MCU movies released until this point before Avengers: Infinity War hits theaters. So far, we’ve covered most of the Phase One movies save for The Avengers (a piece for which is coming soon). These are lengthy pieces and it’s a fun holiday read so do check it out if you get the chance and let us know your feedback, and also what other features would you like to see us do.